THE PEOPLE WITH TOO MUCH CONTROL!

You ever wonder which people are the ones who bring you the things you often watch to the big and small screen?

It is not really the directors, writers – or even producers – who stand behind the biggest films and television shows. No, the ones calling the shots and green – or red – lighting movies and TV series are studio and network executives. More often than not, the creative industries aren’t being run by the most creative folk. No, the people who have the most power are usually dealing with numbers, trends and statistics – and they categorize the actual talent just as if human beings were data.

This feature is not supposed to just slam them – after all, business is business and has to be profitable in order to carry on operating. We wouldn’t have Fox Searchlight, Sony Classics if X-Men, Avatar or Spider-Man weren’t making the big bucks. Blockbusters make money that funds the indies, cinemas can screen cult movies because they also play Fast & Furious or Jurassic World at the same time. It’s a very cohesive, synergetic ecosystem that had been in play for a long, long time in the galaxy not so far away – and it has proven to work, keeping almost everyone happy. Almost.

The question that we really need to ask is, how ethical are the practices of those running the show – the people behind the curtain that you rarely, almost never, actually hear about. These are the men, after all, who can reduce others to an entry on the black list of those who may not be getting any more roles in Hollywood – or, on the contrary, make someone an A-lister up for every major role in town. Where do we draw a line to the kind of power they have over the men and women that we actually do love and care for – those we watch week in, week out on our favorite show or those we run to the theatres for on the opening weekend. There seems to be a fine line between tyranny and, essentially, something that Kanye West calls ‘modern day slavery’. To give you a glimpse of what we are talking about, let’s examine a few examples from the film, TV and music industry.

Example one: on-set misconduct hushed by a large studio.

Months ago (in July), one Ray Fisher – known mostly for his role in ‘Justice League’, in which he portrayed Cyborg – publicly spoke out about the abusive treatment he endured during reshoots for DC’s assembly of its biggest heroes, coming from under the Warner Bros. label. Fisher complained about Joss Whedon and his “gross, abusive, unprofessional, and completely unacceptable” behaviour towards him – and, possibly, other cast members. Ray didn’t shy from name-dropping the executive behind the movie: “He [Whedon] was enabled, in many ways, by Geoff Johns and Jon Berg.” – the former being the president of DC Entertainment and the latter, at the time, one of the co-presidents of Warner Bros. The very same day, Warner announces that Jason Momoa – Fisher’s fellow cast member – was cast as the lead voice actor in live-action Frosty the Snowman. Just a regular news story, right? Wrong! Last week, Momoa took it to Instagram to brand the former Frosty the Snowman info as ‘fake’ and a mere ‘distraction’ from Fisher’s claims against the studio and its director. 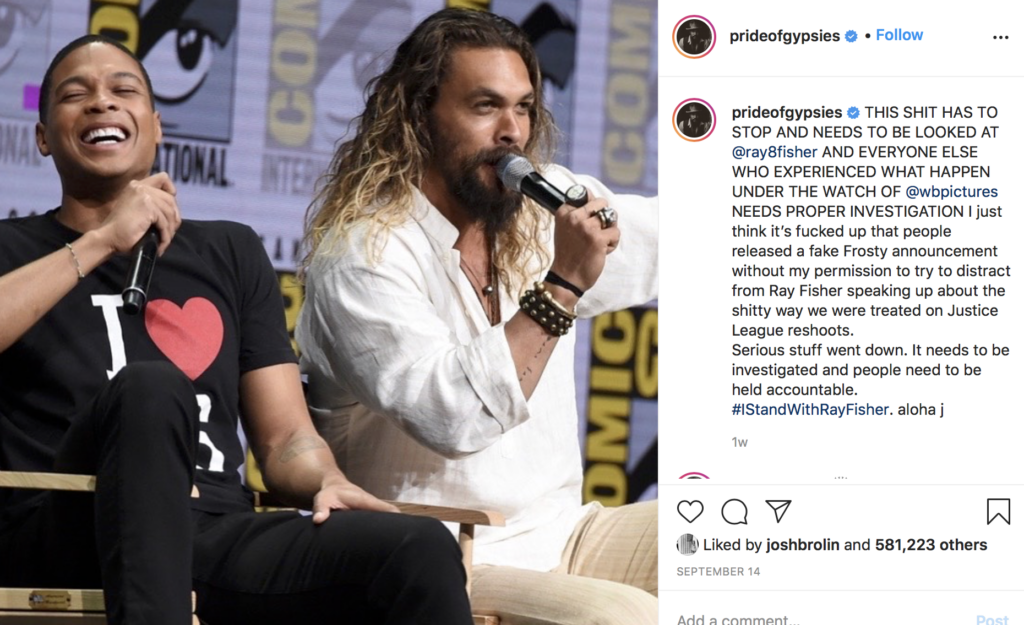 Momoa said that while reshooting Justice League with Whedon, ‘Serious stuff’ that ‘needs to be investigated and people need to be held accountable.’ went down. ‘Aquaman’ star also didn’t hold back when revealing that the Justice League cast were treated ‘shitty’ and that he stood with Ray Fisher (#IStandWithRayFisher). Momoa stressed that it was “f-ed up” that Warner would go as far as releasing a fake casting story to shut down Ray’s revelations and that “s*** has to change”. We are talking about a massive blockbuster, big-name director and an all-star cast that suffered at his hands. Just imagine – if Momoa, Ben Affleck, Gal Gadot and Henry Cavill are getting bullied on set and aren’t speaking out, then how much power does the studio have over them? How much of a free reign does the director such as Whedon (man behind ‘Avengers’ and ‘Buffy the Vampire Slayer’) get? If the big names were afraid to speak out and stand up for themselves, what kind of a chance did a young and relatively unknown black actor really have? These are conversations that we need to be having! 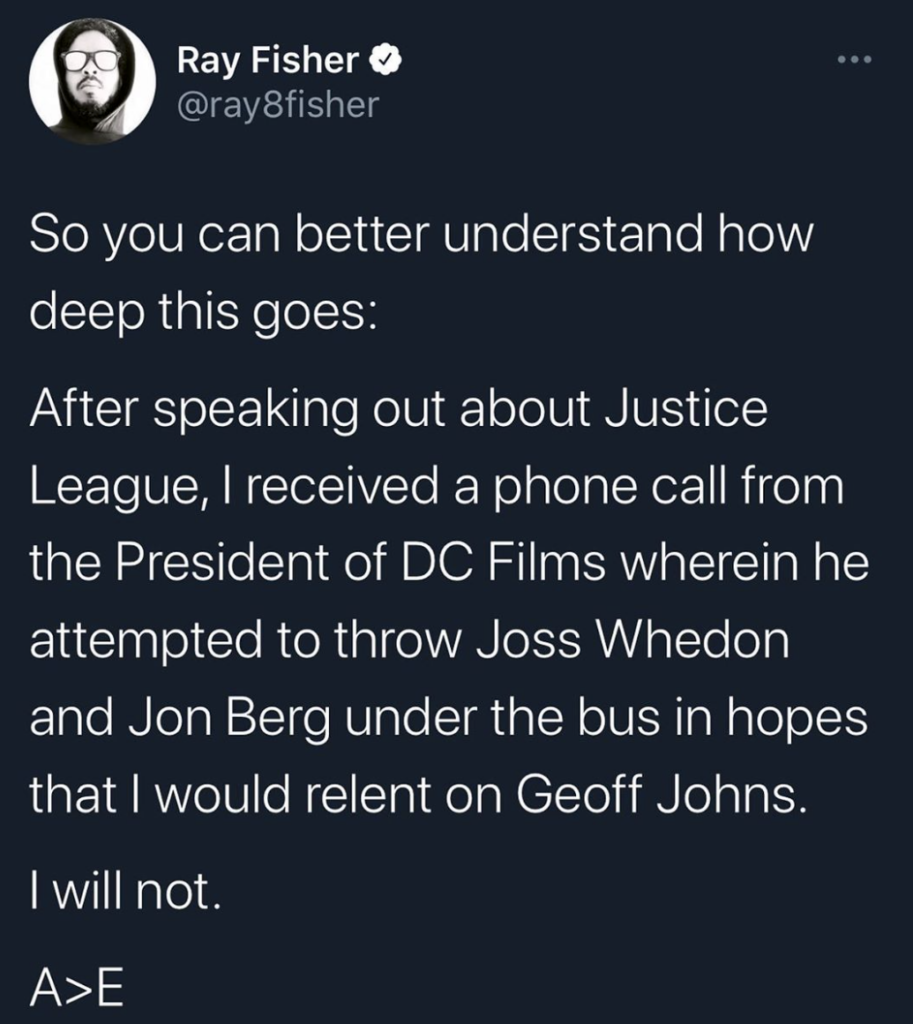 Jeremy Tardy made headlines just days ago, making his high profile exit from ‘Dear White People’ – a hit Netflix series produced by Lionsgate. The actor accused the studio, as well as Netflix, of “racial discrimination” and did not pretend the motivation behind him leaving the show were “purely financial”. In his Facebook announcement, he wrote that Lionsgate offered him a contract for a specific number of episodes, but then refused to even consider his counteroffer and did not think twice about negotiations. What is really disturbing here is the fact that one of his white colleagues, to whom Tardy referred to as “a true ally”, had received the exact same offer and – check this! – managed to successfully renegotiate it!!! Initially, Tardy and six other recurring cast members all turned down their renewals in order to, collectively, get a better deal as a group, which did not pan out, because most members of the cast had reached agreements with the studio on the side. 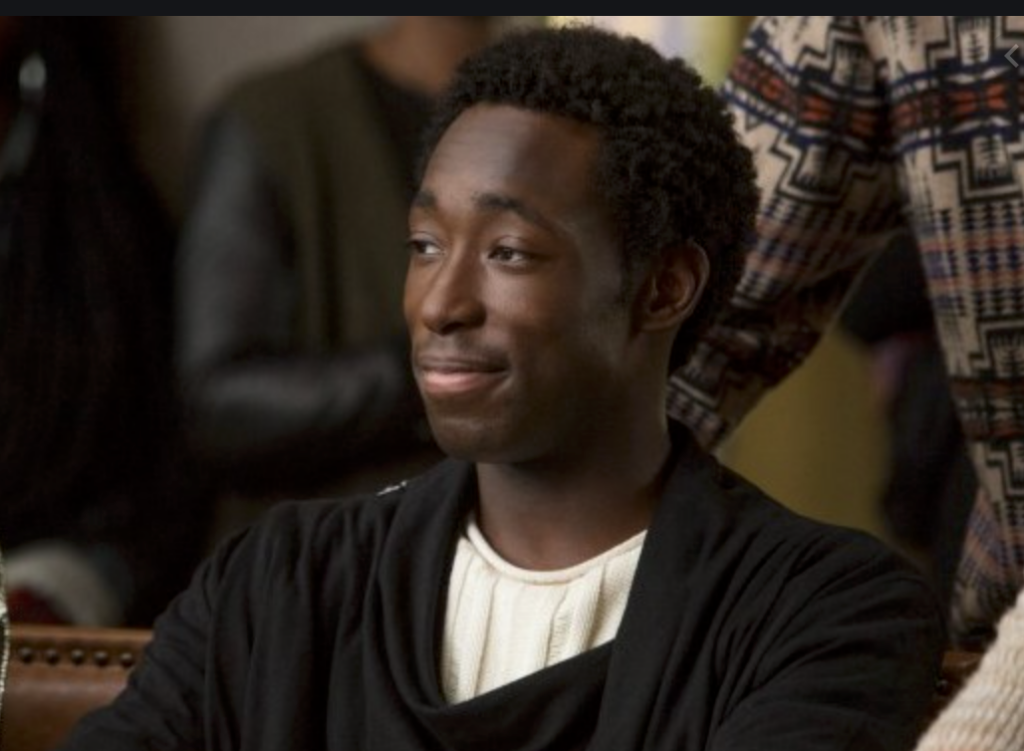 Tardy was written out of the show and decided to detail his experience and thoughts on the matter. He called out both Lionsgate and Netflix: “These companies have recently released statements and even donations in support of the Black Lives Matter movement. I am calling out their shameful practices of discrimination and racial inequality with regard to how they have historically undervalued and lowballed people of color. Politically correct lip service and symbolic gestures do not absolve you of the daily responsibility of doing business in a fair and equitable manner.” 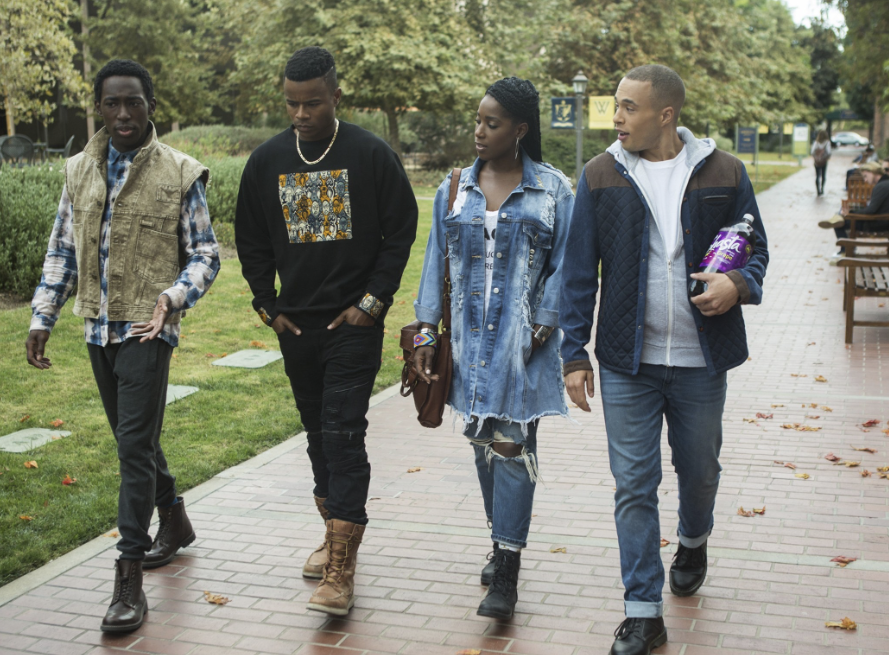 Netflix decided to remain silent on the matter, whereas Lionsgate claimed the decision had nothing to do with the skin color of the actor and was purely financial – all in spite of the budget significantly increasing for season 4-onwards. Now, are we seriously going to ignore the fact that while a white actor gets what he asks for, the black cast member – on a show dealing with racial discrimination!!!!! – has to leave over his own demands that the studio is not even willing to discuss? Instead of opting-in for an unfair, low-level figure, a black man wanted to get what he is worth and instead, he is being cut altogether? Now that’s some next-level bullshit, alright!

Example three: It is not just the films and television – it’s the media. Including the music industry.

Kanye West is a powerhouse, right? Private life aside, wife aside, his public meltdown aside, speaking from purely artistic angle – we are talking about a superstar rapper, huge producer, a billionaire whose Yeezy brand is one of the biggest shoes that gets made by the German footwear giant, adidas. You’d think that by now, Kanye does whatever Kanye wants to do, right? You couldn’t be any more wrong about that either so once again, let us shatter your perfect bubble and open your eyes to the dark side of the music industry, which essentially is a world of exploitation. 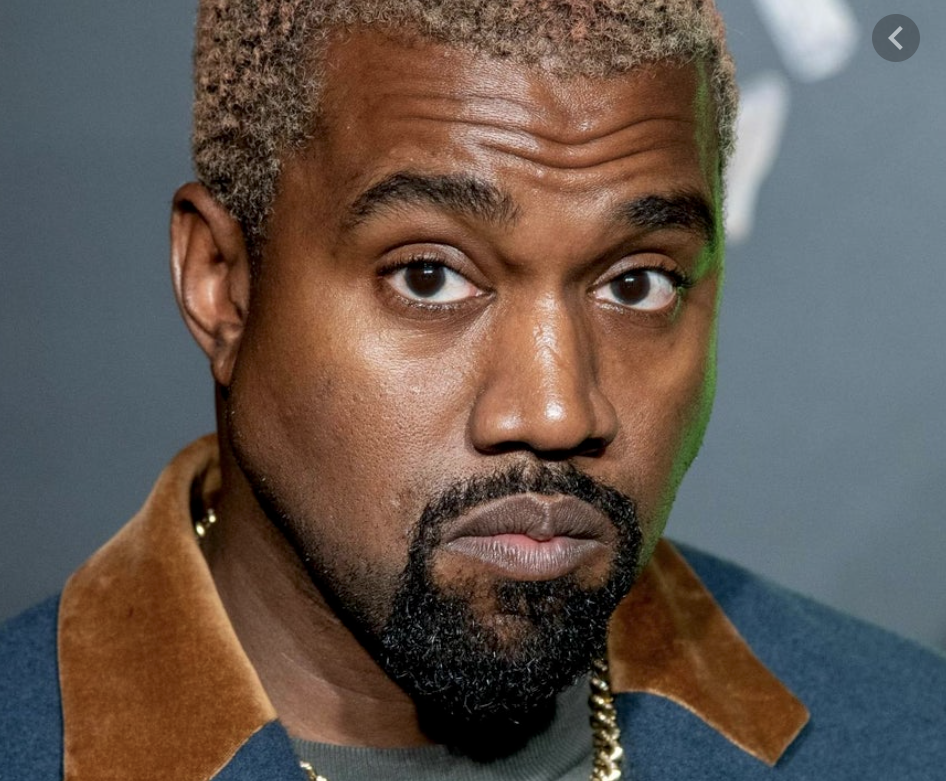 Now, we have all heard of stories that looked into Kesha’s sexual harassment allegations and inability to break away from her contract to a man accused of abusing her, as well as a grown woman known as one of the biggest popstars, Britney Spears, fighting for emancipation from so-called ‘conservatorship’ that her father holds over her. Kanye West took it to Twitter (yeah, we know, once again, but seriously – keep reading) to talk about the “modern day slavery” that the artists are signed onto when, being young and naïve as well as not knowing their rights, they get coerced into signing contracts they cannot possibly understand, full of secret clauses and small print that limits their profits as well as right to – believe it or not – their own music! As in, songs that they wrote, produced, recorded… whatever, basically, the main point is, it’s not theirs! To back his own claims, Kanye went one step further than anybody else – he actually published the photos of his contract. Now, we’ve been making jokes about signing deals with the devil since day 1 of our existence, but this here ain’t really far from it – hell, it actually almost feels like the fragile artistic soul belongs to the recording labels, because they take the most intimate parts that come from within the artists and just claim ownership over those things. If we are to believe Kanye and his contract, people like him, as well as Nicki Minaj, Justin Bieber, Britney and Kesha – they all belong to the music industry, because their entire body of work stays with whichever label they were initially with! I mean, how flipping crazy is it?! These mammoths of studios basically take full advantage of years of hard work and it is hard to imagine that when a guy like Kanye has no rights to things he has authored… then what kind of a deal does a young up-and-coming artist receive from the get-go?! 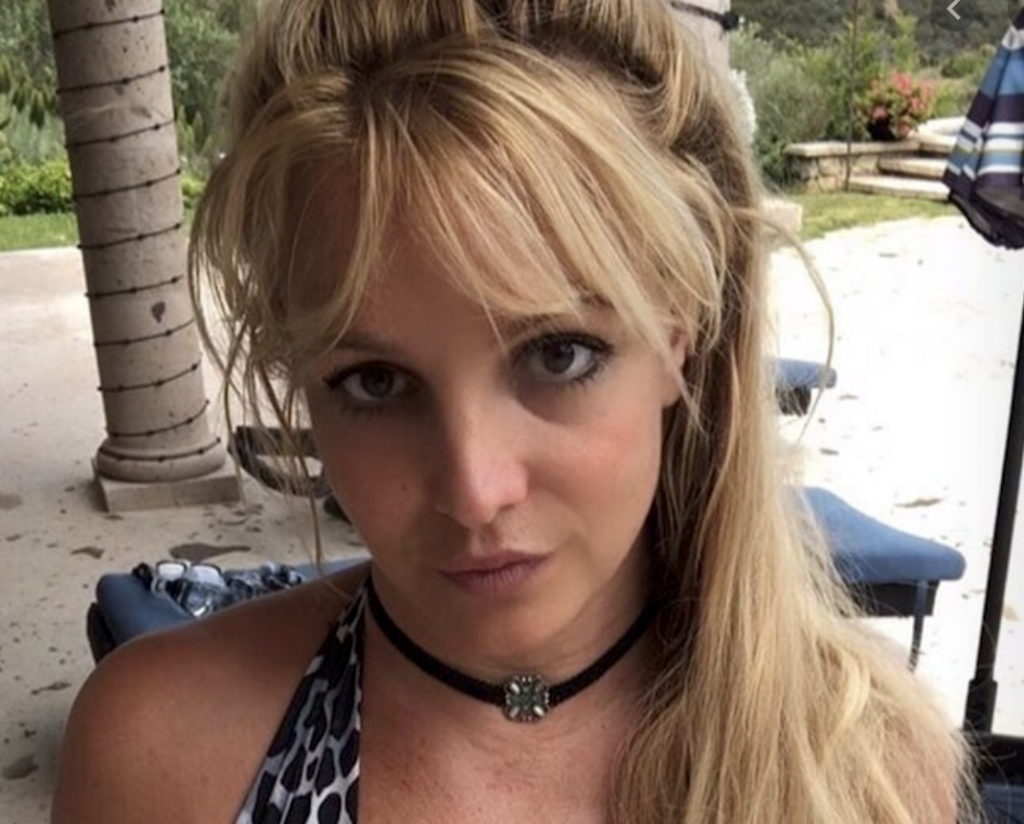 These three examples are very different, but what connects them all is the fact that they all come from within the world of media – world created for many and by many, but held by the throat simply because of the very few that get to call all the shots. But it isn’t right, now is it – we are the consumers and then artists are a product that those guys sell to us. Without us, there is no product – and that product itself is a breathing, living person that we want to support a lot more than those old dudes cashing the fat checks on somebody else’s talent.

We can help change it, and the artists need us to back them up – the pyramid is the wrong way around now, just like the well-known scheme. It shouldn’t be upside down – that order should be reversed and as the target audience for all-things media-related, we get to have an opinion, we get to be upset and enraged, we get to and we should (!!!) air these things in public, on socials, in private conversations. Internet, word-of-mouth, anywhere – the change starts with us.