In 2006, Borat (Sasha Baron Cohen) came to America and exposed the Western Culture for its ignorance, naivety and unwitting (as well as premeditated) discrimination, created some misconceptions that banned the movie in Kazakhstan and Russia (even though Borat speaks Hebrew and a little bit of Polish), shocked people all over the world and gave us laughter and joy through hour and a half full of absurd. Now, more mature and experienced than ever before, Borat is back with another mission, but this time, it’s not just fun and games – this time, the stakes are bigger than ever.

Borat, sentenced to slavery for shaming his country on the global stage, is finally set free. 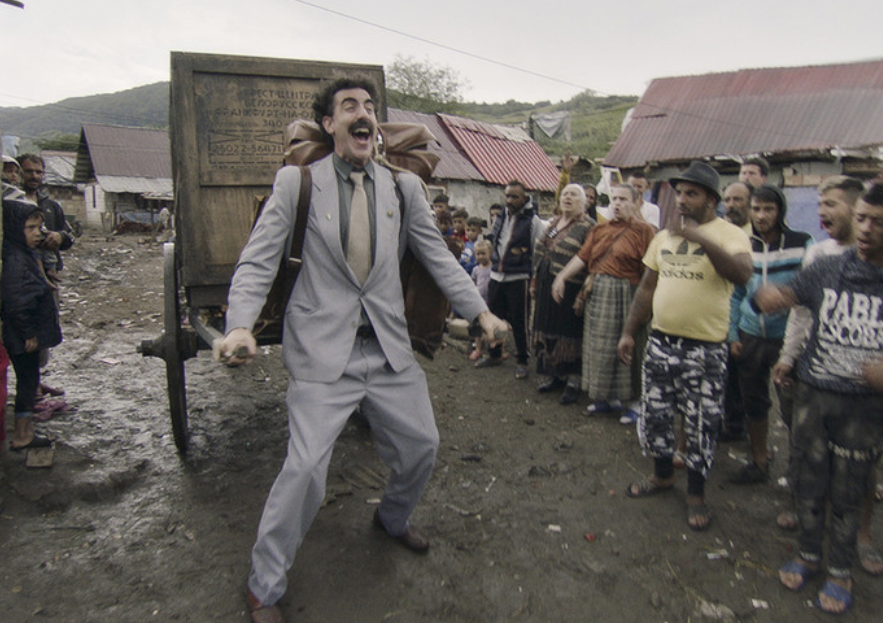 The prime minister of Kazakhstan sends him to America yet again – his mission is to deliver a gift to the Vice President of the United States, Mike Pence, in order to get closer to Donald Trump and benefit the Great Nation of Kazakhstan. When things go wrong and Borat loses the said gift, he decides that the best course of action is to bequeath Pence with his own daughter, Tutar (the brilliant Maria Bakalova). The girl gets a complete, ‘American’ makeover and – much like her father on his first visit to the USA some 14 years ago – gets accustomed to the stereotypical, American ways. On her own journey, Tutar slowly starts resenting the idea of being someone’s property and begins to figure out her own hopes and dreams – which, at first, does not really work for Borat, who is facing a death sentence in Kazakhstan, should he fail his quest. 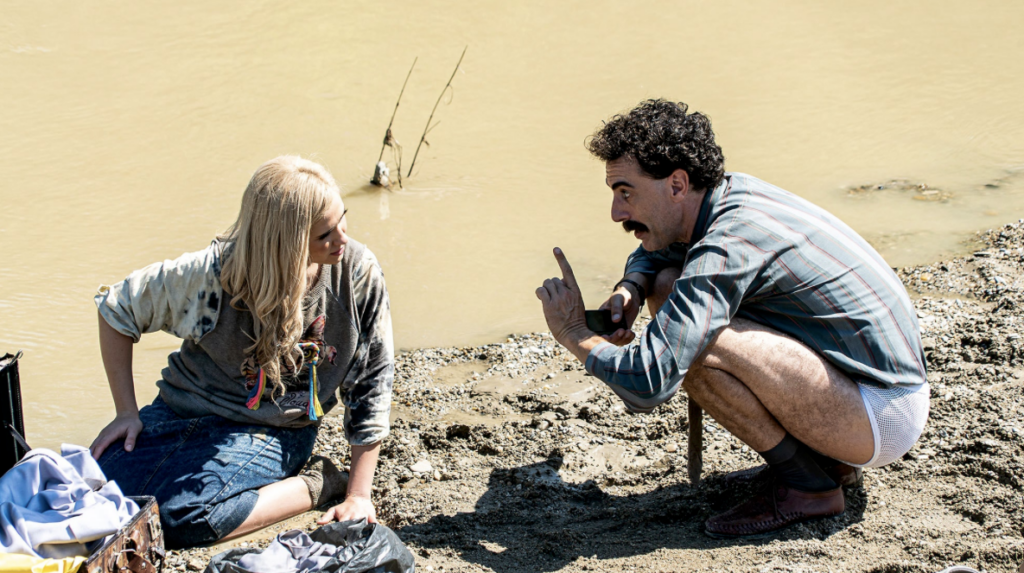 On his twitter, Edward Norton referred to Sasha Baron Cohen as “the modern-day Peter Sellers” and it’s hard not to agree with such a powerful comparison.

Cohen, known for pushing boundaries and breaking all rules with his gunslinger attitude, has never been known to shy away from strong opinions nor speaking out against injustice. His latest series – last year’s “Who is America” – exposed a lot of politicians for who they really are, so being an activist is nothing new for him.

What is very new is weaponizing Borat the way he did this time and going straight at Donald Trump, his right hand man (Pence) as well as Trump’s former lawyer, Rudy Giuliani. It takes guts to pull something like this off – especially with the help of such a big ally in the form of a streaming platform the size of Amazon Prime. Cohen weaponizes comedy to expose the rise of America’s far right movement – now more out than ever before under the current leadership – to warn people about the impending doom and gloom that awaits under the corner should we see the repeat of 2016. Amid the Covid-19 crisis, he reminds us what is really at stake and what we should look out for in the closest future, as people ‘fighting it now’ are those who are more like Rudy Giuliani, who praising Trump’s failed attempt to tackle the virus while coughing at Tutar sitting less than a feet away from him. 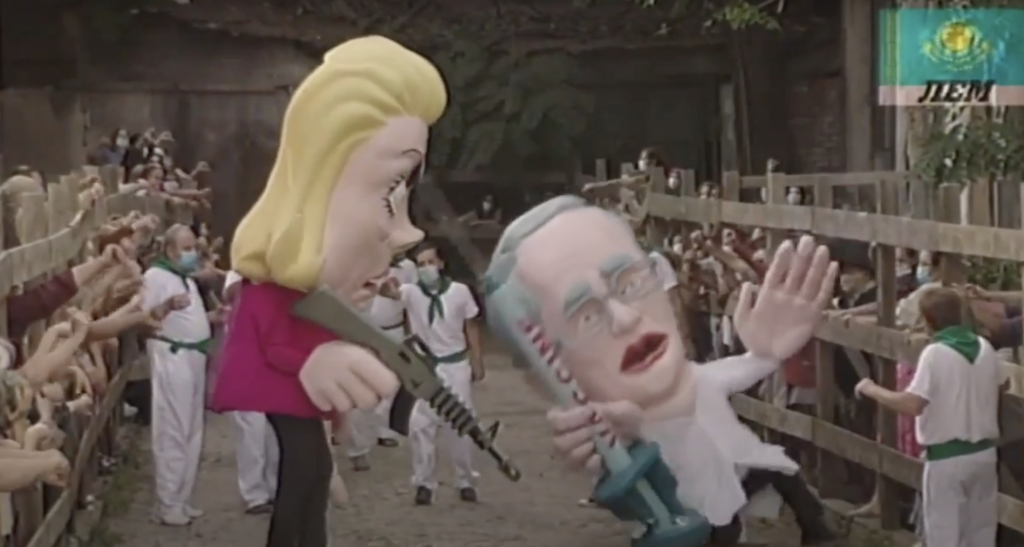 Cohen doesn’t stop there, because it’s not just politics – it’s also the impact of current politics on the citizens of the US.

Exposing sexism and objectification of women (for example, through the creepy culture of ‘Debutante’ culture at a ball in Georgia), racism (a baker decorating a cake with an anti-Semitic message without as much as a bat of an eyelash or chants at hailing at far-right ally), lack of education (two pro-Trump conspiracy theorists who believe that their political opposition drinks blood of young children), among other things.

The prevalent theme of this story is the relationship between a father and his daughter, for whom this journey is not just a bonding experience, but also a lesson. Tutar becomes more independent and grows stronger, gaining confidence and more belief in herself and her own abilities, while Borat slowly learns to abandon the ‘old Kazakh ways’ and open himself up to progress.

His views on women change through Tutar’s transformation into this ambitious, young woman who wants to be more than just a woman living in a golden cage under the rule of an older, white male. And that’s where you see hope – hope for a better future, which is the underlying theme of the second Borat. The dark humor in this one comes from the darkest places, but it all stems from not knowing any better. Cohen doesn’t attempt to make the world all good and bad, black or white, right versus left. No, he wants to show us that underneath it all, we are all humans and there’s kindness within us – it’s just that, some of us may have been conditioned to think otherwise. Think of it – the two conspiracy theorists he is staying with, Jerry and James, may believe the craziest hoaxes, may dislike the left wing people and have some really outdated views, but they offer this foreign caricature of a reporter a place to stay for 5 straight days during the lockdown amid the pandemic. If this doesn’t show you that there is some hope for these guys and that maybe they just need to be exposed to certain conversations and challenged over their beliefs, then I dunno what will prove you otherwise. But that’s something that Cohen wants – to start a conversation while also making you laugh a little bit, because the best comedy comes from the saddest, often most horrific places.

It is hard to praise the script on a mockumentary that relies on reactions of non-actors, but it is very easy to praise the direction, as well as fantastic acting that often relies on improv.

It’s hard to imagine how many places they must have gone to and been rejected from before they ended up at those we see in the film, but hats off to Maria Bakalova and Sasha Baron Cohen for how they thrive under the pressure and deliver this compelling relationship in front of the cameras. The Bulgarian actress is a true gem and a rare find, as she brings Tutar to life and totally owns her. It is so easy to buy those two as a father and daughter because of the incredible chemistry they have on screen and the dedication to their performances.

It is worth noting that Bakalova had hardly been out of Bulgaria – as reported by Cohen himself – and yet she tackled this role with bravery and courage. 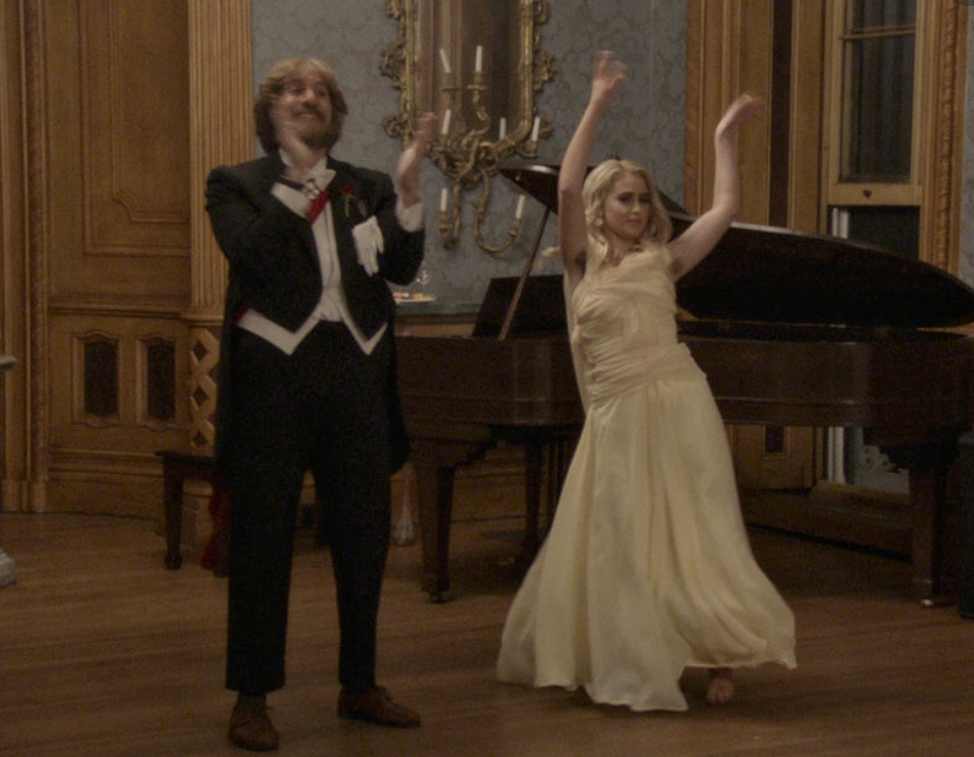 She is thrown out into the deep water where she had to talk to real people she’s never met before and make them believe that Tutar and Borat really are those strange, foreign travellers who don’t believe that women can drive or own businesses and who try to go and abort the plastic toy baby at a pro-life centre for women, mocking the abhorrent abortion laws in Georgia. Those are Tour de France performances from the two of them – and for Cohen, it seems like the apex mountain, because he has definitely grown into the role he first portrayed 14 years ago.

Borat is a hilarious and outrageous comedy, spiked with enough drama and political messages covered in enough dark jokes to resonate with anyone for a long time after the movie ends.

It is a big win for Cohen and hopefully, a win for change, because it is hard to stay oblivious to some of the themes explored in this mockumentary. In some cases, comedy is the best medicine, and perhaps this is the way Borat can help heal America. Available on Amazon Prime, ‘Borat Subsequent Moviefilm: Delivery of Prodigious Bribe to American Regime for Make Benefit Once Glorious Nation of Kazakhstan’ is a fantastic example of activism through comedy and a testament to the power yielded by film as a medium.

SCREAM FOR ME AGAIN SID….

Documentaries that will blow your mind!

‘SPEAK UP, SPEAK OUT AND DON’T BE AFRAID’! ABEL FERRARA INTERVIEW.