‘I FELT LIKE I WOULD NEVER BE BELIEVED’ FKA twigs.

To be this transparent and share so much personal trauma is incredibly powerful and will help thousands of women, men, girls and boys who may be in a similar situation.

FKA twigs has been super vulnerable talking to Louis Theroux during his BBC Sounds Podcast. Often successful women in the entertainment industry get seen as ‘bad bitches’, (whatever that means) the kind you don’t mess with, the reality is no matter how powerful the world perceives musicians, athletes, entrepreneurs they are still human and have their breaking points, just like the rest of us. Being good at your job doesn’t mean you can’t be manipulated, controlled, hurt and even abused in your personal life, the parallels exist but very few are this honest about it.

FKA twigs talks about life in lockdown, how she has adapted the way she works now and her artistic side. A musician and performer in every sense, who truly challenges herself to be her best in life through her art. twigs talks about her style, costumes and how the media can change the narrative so the truth gets lost. Hearing her talk about finding her own identity and the journey she has personally gone to be able to become the artist she is now is super interesting and inspiring. The chat is also enlightening and entertaining, twigs is relaxed and full of energy as she talks about inspirations and how much she loved ‘Shakespears Sister’ to Louis’s shock. 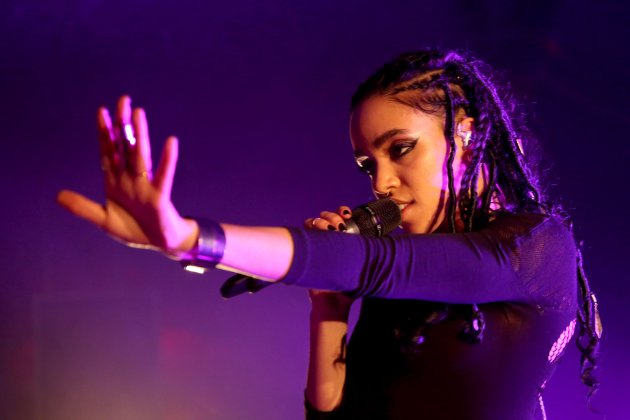 twigs is currently suing actor Shia LaBeouf for physical, mental and emotional abuse. The two met on the set of the movie ‘Honey Boy’ started dating and eventually split in 2019. During the BBC Sounds podcast she talks about how their relationship went from ‘honeymoon period’ to abusive, how she felt frightened and controlled by the actor. Shia LaBeouf has said many allegations against him are untrue but apologised for the hurt he had caused. It’s interesting that he acknowledges wrongdoing but then also at the same time doesn’t take accountability, almost presenting himself as a victim too, excusing his actions.

FKA twigs has always been someone admired for her creativity, beauty and sense of individuality, she’s not someone that flaunts her relationships and even talks about them publicly, to hear her talk about the abuse she endured and bullying she has experienced over the last few years is heartbreaking.

When she dated fellow Brit Robert Pattinson she was subject to online trolls and seen as unworthy she says, mostly based on the fact she wasn’t white and blonde? The racism she talks about suffering whilst dating Robert was horrendous. twigs mentions feeling self conscious, made to believe she was ugly by the bullies online. It’s no surprise she doesn’t enjoy social media these days, but she does seem like someone who is incredibly self aware and finds ways to love herself and not conform to any social pressures.

We highly recommend listening to this conversation between FKA twigs and Louis Theroux it will not only leave you feeling empathy but also awareness and a reminder of what abuse looks like and how it can damage even the strongest person. There is no ‘one fits all’ it can happen to anyone. twigs talks about therapy being a big help and her best-friend, but it all started with that point when you have had enough and accepted something terrible is happening. She googled for help while in America and spoke to a total stranger, much like a Samaritan, a free service we have here in the U.K for support and unconditional kindness, it helped her on her journey of escaping and starting to heal.

This chat was recorded at 2 different times, the chat around the abuse she has suffered was a part of the chat recorded recently while the rest was recorded before she revealed to the world what she endured. Her reason just to help others and bring awareness to how an abuser can control, groom and control you.

If anything in this chat has triggered you and you need support, click the link below for some great organisations packed with people that can help.

HOW TO REALLY MAKE IT AS AN ‘INFLUENCER’ WITHOUT LOSING WHO YOU ARE!