His family released a statement today sharing the news that he had been privately suffering with colon cancer for 4 years. Recently there had been concerns about his rapid weight loss but nothing had been confirmed on why. The outpouring of love, shock and sadness from his fellow actors, fans and friends dominated all social media and entertainment news platforms today. 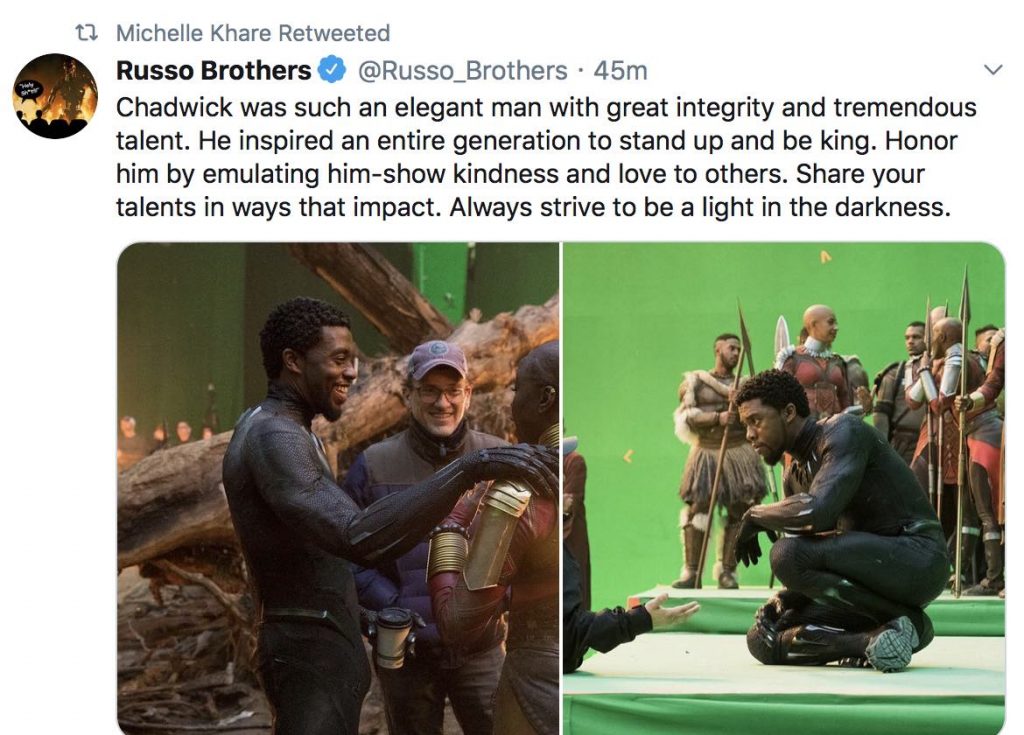 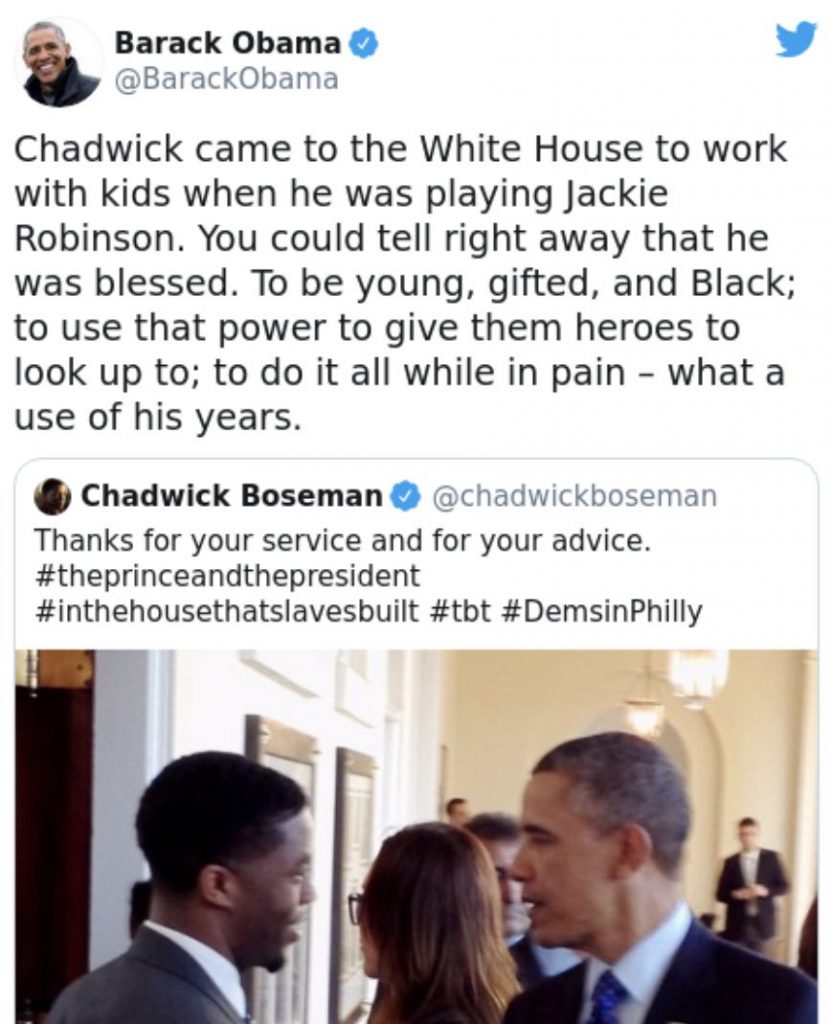 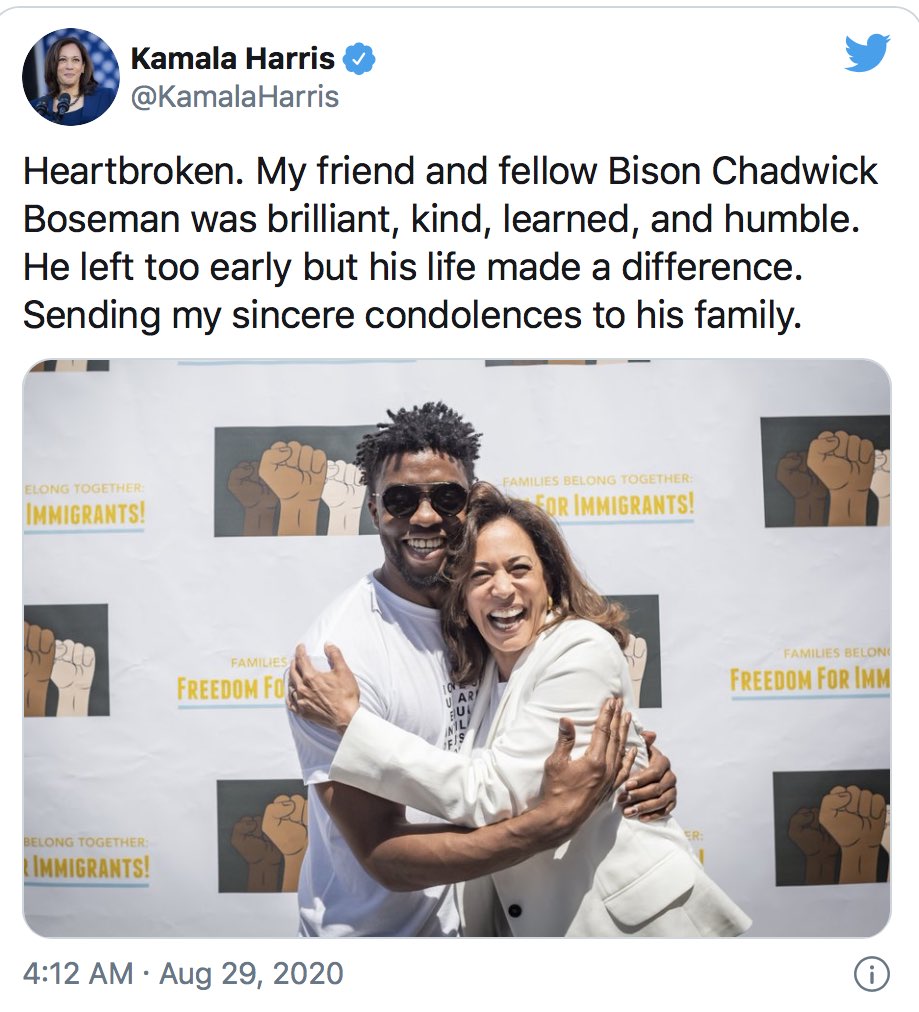 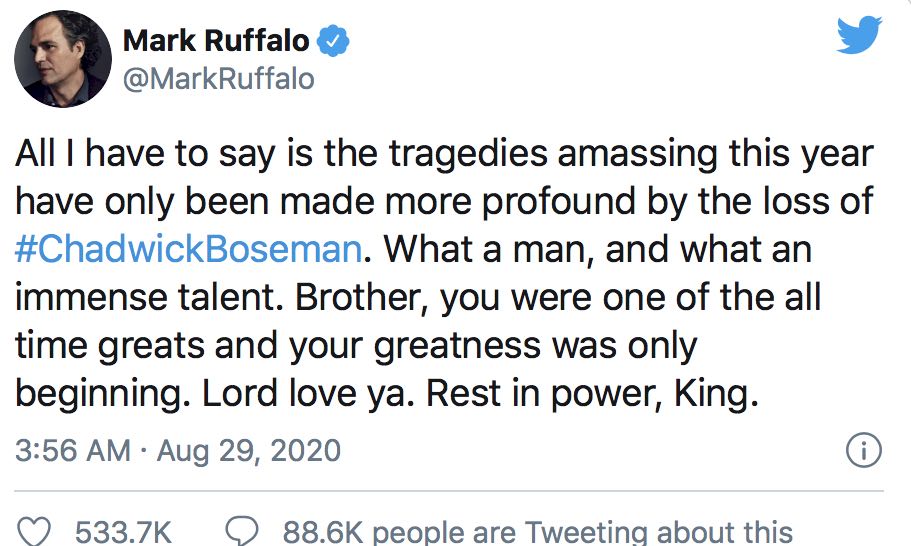 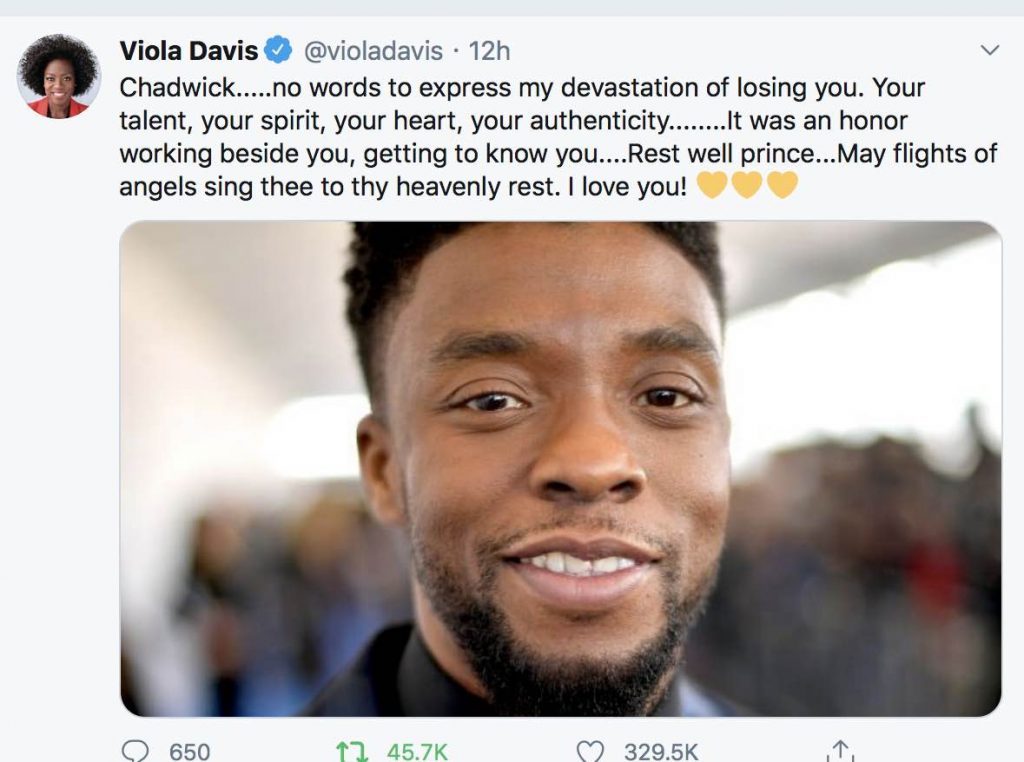 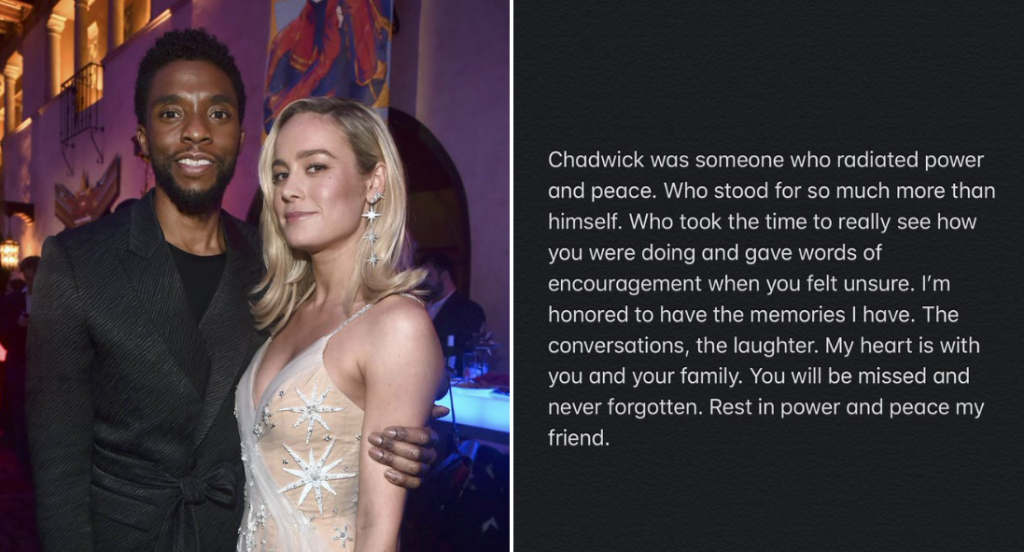 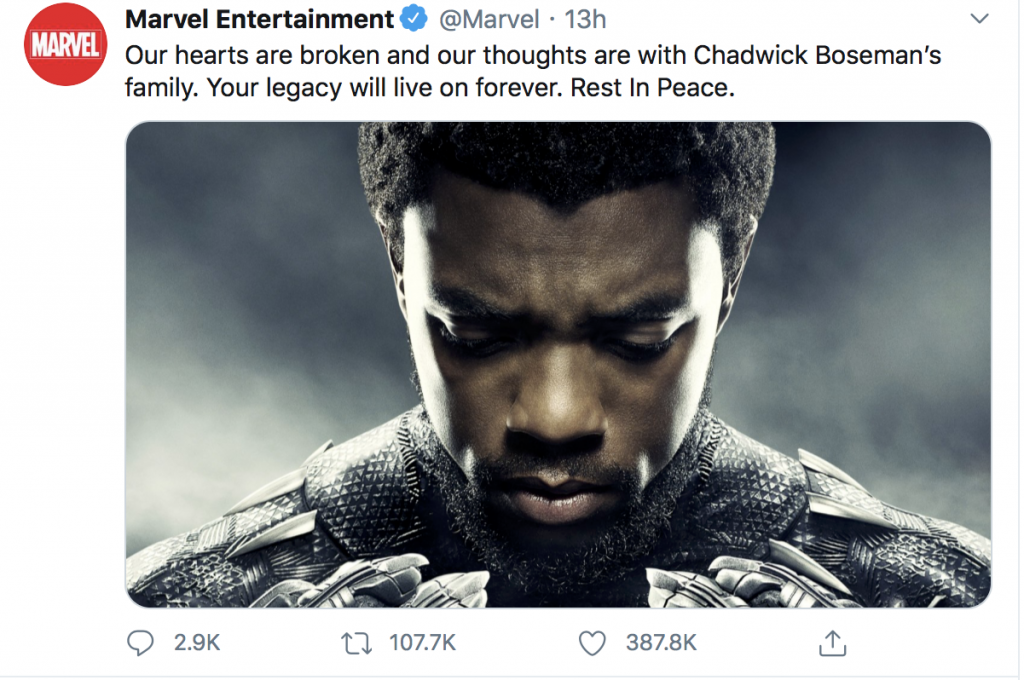 This was a man that was truly loved and appreciated both for his work on screen and his kindness off screen. Pictures of him visiting young children in hospital who also were suffering from life threatening conditions were shared online and a reminder how much even in his own darkest times he gave back to those that needed to smile and feel seen. 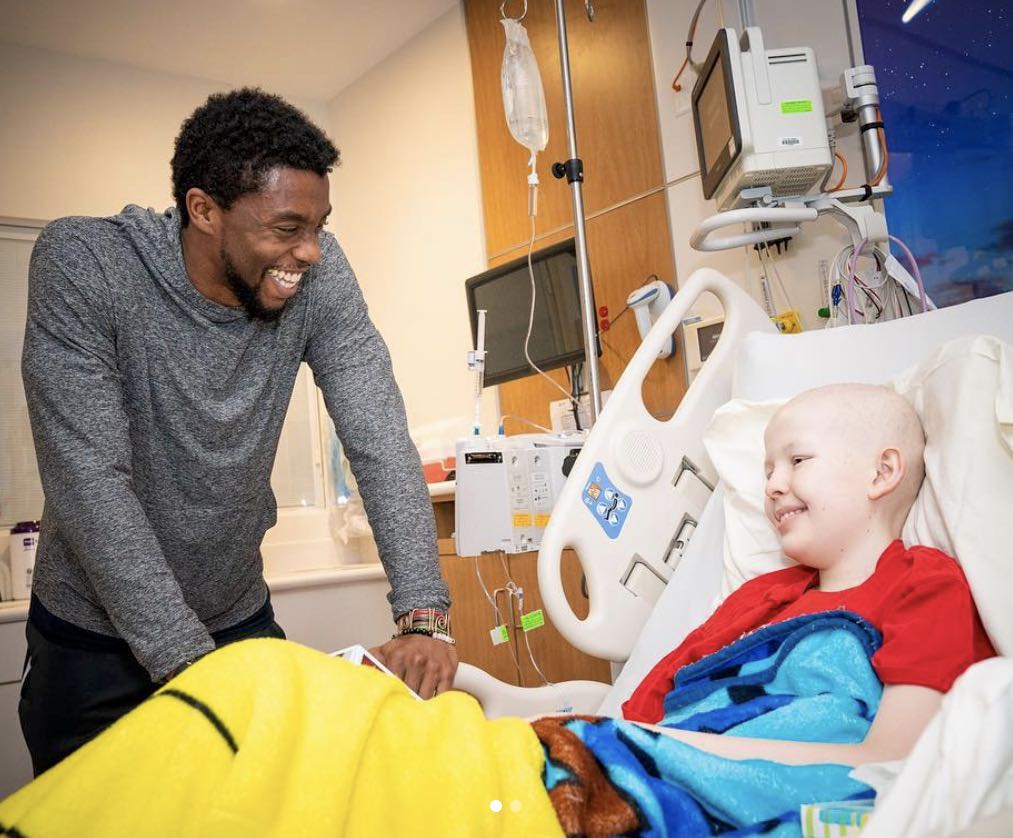 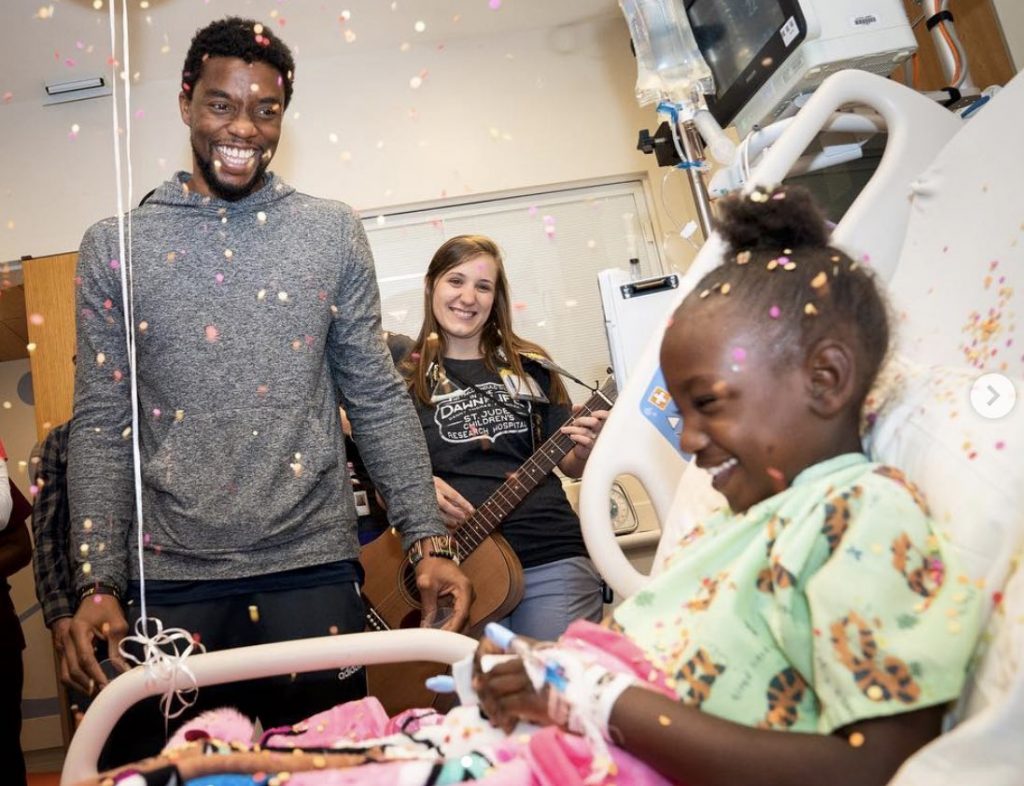 The Black Panther star has had an illustrious career, cast in some of the most iconic roles. He has played Baseball superstar Jackie Robinson, Musician James Brown and most recently also appeared in Spike Lee’s “Da 5 Bloods” and just recently finished shooting August Wilson’s ‘Ma Rainey’s Black Bottom’.

Director Spike Lee revealed he had no idea Chadwick was unwell  during shooting.

“We filmed Da 5 Bloods in Thailand, and it was hot, jungles, mountains, and Chadwick was there with us all the way. I never, ever suspected that anything was wrong. No one knew he was going through treatment, chemotherapy. ‘Chadwick, a trooper, never complained. He was there every single minute in the moment, and his performance is a testament to what he put into that role, and all his roles. We miss you, Chadwick, we’re going to celebrate your life.”

Ryan Coogler the Director behind Black Panther shared a personal insight, with this touching tribute.

“I inherited Marvel and the Russo Brothers’ casting choice of T’Challa. It is something that I will forever be grateful for. The first time I saw Chad’s performance as T’Challa, it was in an unfinished cut of ‘Captain America: Civil War.’ I was deciding whether or not directing ‘Black Panther’ was the right choice for me. I’ll never forget sitting in an editorial suite on the Disney lot and watching his scenes. His first with Scarlett Johansson as Black Widow, then with the South African cinema titan, John Kani, as T’Challa’s father, King T’Chaka. It was at that moment I knew I wanted to make this movie. After Scarlett’s character leaves them, Chad and John began conversing in a language I had never heard before. It sounded familiar, full of the same clicks and smacks that young black children would make in the States. The same clicks that we would often be chided for being disrespectful or improper. But, it had a musicality to it that felt ancient, powerful, and African.

“In my meeting after watching the film, I asked Nate Moore, one of the producers of the film, about the language. ‘Did you guys make it up?’ Nate replied, ‘That’s Xhosa, John Kani’s native language. He and Chad decided to do the scene like that on set, and we rolled with it.’ I thought to myself, ‘He just learned lines in another language, that day?’ I couldn’t conceive how difficult that must have been, and even though I hadn’t met Chad, I was already in awe of his capacity as actor.

“I learned later that there was much conversation over how T’Challa would sound in the film. The decision to have Xhosa be the official language of Wakanda was solidified by Chad, a native of South Carolina, because he was able to learn his lines in Xhosa, there on the spot. He also advocated for his character to speak with an African accent, so that he could present T’Challa to audiences as an African king, whose dialect had not been conquered by the West.

“I finally met Chad in person in early 2016, once I signed onto the film. He snuck past journalists that were congregated for a press junket I was doing for ‘Creed,’ and met with me in the green room. We talked about our lives, my time playing football in college, and his time at Howard studying to be a director, about our collective vision for T’Challa and Wakanda. We spoke about the irony of how his former Howard classmate Ta-Nehisi Coates was writing T’Challa’s current arc with Marvel Comics. And how Chad knew Howard student Prince Jones, [whose] murder by a police officer inspired Coates’ memoir ‘Between the World and Me.’

“I noticed then that Chad was an anomaly. He was calm. Assured. Constantly studying. But also kind, comforting, had the warmest laugh in the world, and eyes that [saw] much beyond his years, but could still sparkle like a child seeing something for the first time.

“That was the first of many conversations. He was a special person. We would often speak about heritage and what it means to be African. When preparing for the film, he would ponder every decision, every choice, not just for how it would reflect on himself, but how those choices could reverberate. ‘They not ready for this, what we are doing…’ ‘This is “Star Wars,” this is “Lord of the Rings,” but for us … and bigger!’ He would say this to me while we were struggling to finish a dramatic scene, stretching into double overtime. Or while he was covered in body paint, doing his own stunts. Or crashing into frigid water, and foam landing pads. I would nod and smile, but I didn’t believe him. I had no idea if the film would work. I wasn’t sure I knew what I was doing. But I look back and realize that Chad knew something we all didn’t. He was playing the long game. All while putting in the work. And work he did.

“He would come to auditions for supporting roles, which is not common for lead actors in big budget movies. He was there for several M’Baku auditions. In Winston Duke’s, he turned a chemistry read into a wrestling match. Winston broke his bracelet. In Letitia Wright’s audition for Shuri, she pierced his royal poise with her signature humor, and would bring about a smile to T’Challa’s face that was 100% Chad.

While filming the movie, we would meet at the office or at my rental home in Atlanta, to discuss lines and different ways to add depth to each scene. We talked costumes, military practices. He said to me, ‘Wakandans have to dance during the coronations. If they just stand there with spears, what separates them from Romans?’ In early drafts of the script, Eric Killmonger’s character would ask T’Challa to be buried in Wakanda. Chad challenged that and asked, ‘What if Killmonger asked to be buried somewhere else?’

“Chad deeply valued his privacy, and I wasn’t privy to the details of his illness. After his family released their statement, I realized that he was living with his illness the entire time I knew him. Because he was a caretaker, a leader and a man of faith, dignity and pride, he shielded his collaborators from his suffering. He lived a beautiful life. And he made great art. Day after day, year after year. That was who he was. He was an epic firework display. I will tell stories about being there for some of the brilliant sparks till the end of my days. What an incredible mark he’s left for us.

“I haven’t grieved a loss this acute before. I spent the last year preparing, imagining and writing words for him to say, that we weren’t destined to see. It leaves me broken knowing that I won’t be able to watch another close-up of him in the monitor again or walk up to him and ask for another take.

“It hurts more to know that we can’t have another conversation, or FaceTime, or text message exchange. He would send vegetarian recipes and eating regimens for my family and me to follow during the pandemic. He would check in on me and my loved ones, even as he dealt with the scourge of cancer.

“In African cultures we often refer to loved ones that have passed on as ancestors. Sometimes you are genetically related. Sometimes you are not. I had the privilege of directing scenes of Chad’s character, T’Challa, communicating with the ancestors of Wakanda. We were in Atlanta, in an abandoned warehouse with bluescreens and massive movie lights, but Chad’s performance made it feel real. I think it was because from the time that I met him, the ancestors spoke through him. It’s no secret to me now how he was able to skillfully portray some of our most notable ones. I had no doubt that he would live on and continue to bless us with more. But it is with a heavy heart and a sense of deep gratitude to have ever been in his presence, that I have to reckon with the fact that Chad is an ancestor now. And I know that he will watch over us, until we meet again.” 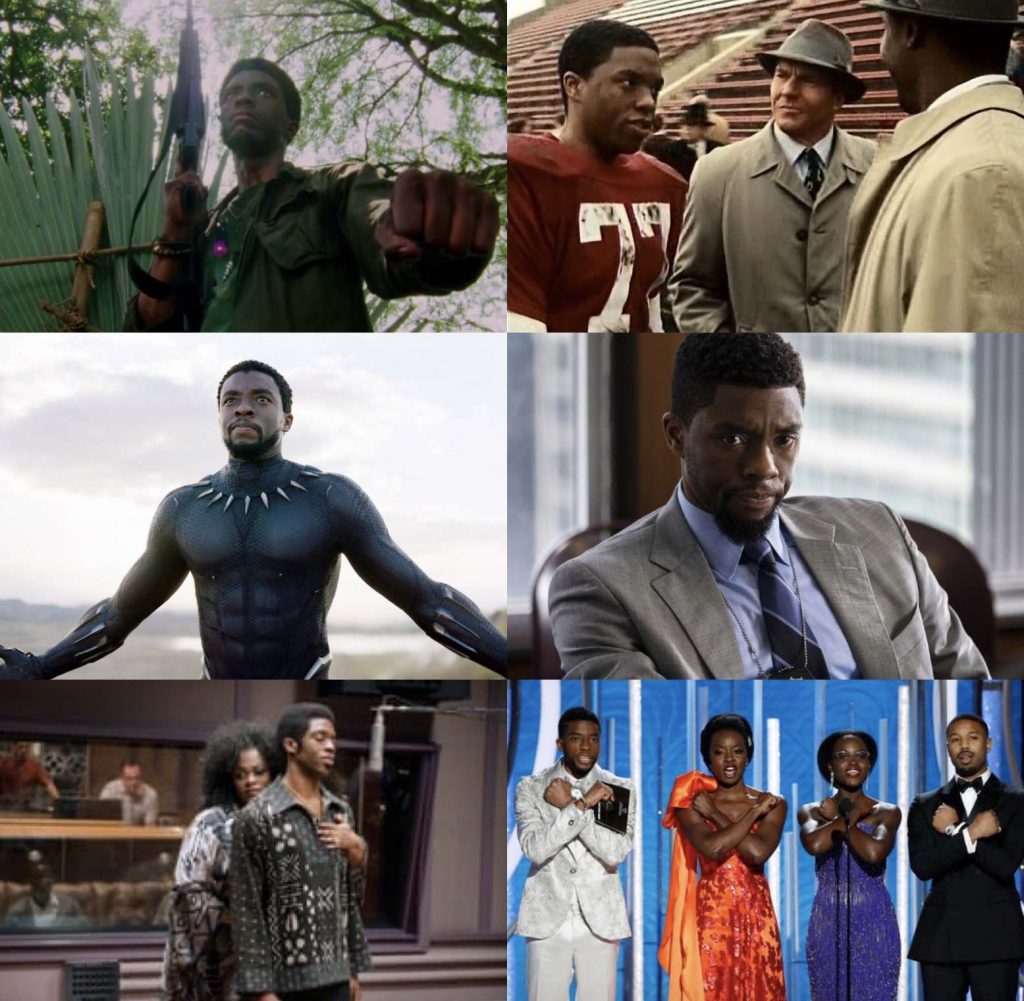 Chadwick believed in representation, education and equality. He worked hard to be a part of the change in the industry wanting to elevate more stories from black and other minority groups often ignored or portrayed in a negative light. Watching his Howard University Graduation speech to the students there he spoke about his own tough experience as a young black actor in the early days.

Asking producers to represent the characters he played in a more positive light resulting in him losing work and receiving  backlash. His agent told him ‘You might not get many auditions for a while as you are seen as difficult. Fearing his career would be over before he even got started Chadwick was relentless with his determination, talent and love for acting, it kept him driven and striving for more.

We send our love and condolences to Chadwicks’s wife, family, friends and fans. 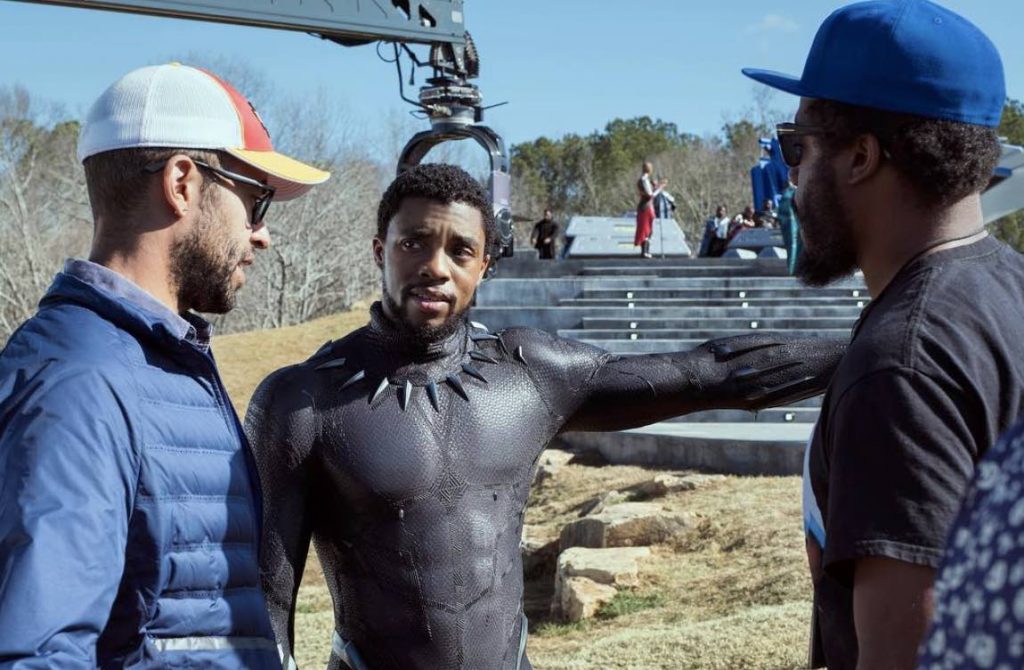 The part he will be most remembered for will be that of KIng T’Challa in 2018. At the time he said how Black Panther redefined what it means to be ‘young, gifted and black’. The film made $1.3 billion worldwide on it’s release. Directed by Ryan Cooglar with a predominately all black cast, which we had never seen before it made such a huge impact culturally and to the landscape of future film.