‘Black Is King’ the visual album written, directed and executive produced by Beyonce has landed!

It’s streaming now on Disney+ and this video to tease the project for all of us that don’t currently subscribe to Disney just dropped. It’s packed with beautiful movement, colour, while celebrating the beauty of blackness. The artistic powers of Beyonce and her team once again will wow you and leave you feeling how does she do it, time and time again. Look out for appearances from Kelly Rowland, Jay Z, Pharrell Williams, Tina Knowles Lawson, Blue Ivy, Naomi Campbell and Lupita Nyong’o on the beautiful emotional project. It was filmed in London, New York, South Africa, Los Angeles, West Africa and Belgium. Using the classic Lion King story Beyonce celebrates young black Kings and Queens, showing inspiration, black power and unity. 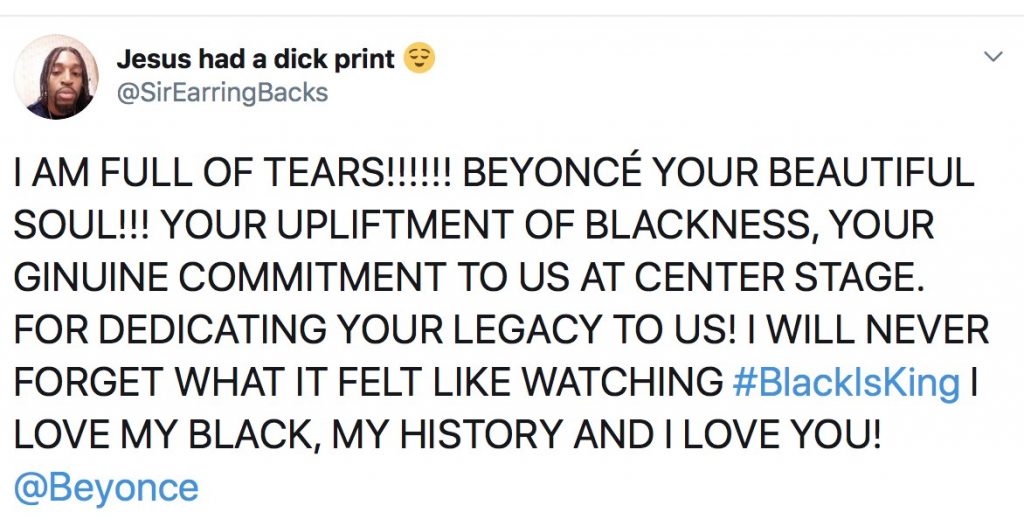 It’s fair to say we have all grown up with their big family animation movies, a reminder of our childhood, whether it was the mystery of the Arabian nights with Aladdin and Princess Jasmine or the iconic Lion King. Since lockdown the film industry much like the music and theatre world has had to accept a loss of money due to a lack of releases with no real idea of when they things will go back to some sort of ‘normal’. Disney however released their new Disney +  channel with classics to keep us in nostalgia that feeling of better times alongside a handful of new movies and series. They adapted quiet quickly and have continued to surprise with new announcements.

The rumour of Beyonce being given an exclusive multi million dollar deal weeks before this release had the internet debating what she would deliver especially after the release of the film last Summer. The multi talented lady, who is now known as an entrepreneur as much as for her infectious music has managed to navigate her way into most boardrooms as a CEO so the excitement was huge. Beyonce’s status, power and influence with the world, especially women is like no other and her perspective when creating music and visuals is on a whole other level.
Disney knew they would now tap into a world that they were not a part of, a slightly older more sophisticated audience. People that want more than escapism they want to feel represented and also crave knowledge, with a desire to emulate their real life heroes not just the animation kind and it doesn’t get any bigger than Beyonce.
Beyonce is at the top of her game with an audience that is truly everyone from the Obamas, to women, girls and the LGBTQ community.  As a black woman her influence and power is endless and at a time like now with ‘Black lives Matter’ Disney teaming up with Beyonce to tell a similar story of Simba, the young cub fighting to find his place in the world, into a story of the journey a young black boy goes through to man-hood is incredibly powerful.
It shows Disney are willing to recreate and invest in voices that can tell the stories that they may not have in the past and right now don’t know how. That shows less ego and a desire to represent the people that they may have lost or never captured. This is exciting and also means their competitors will now also have to explore what they create as the world wants more and we are sick of what is served up.
Beyonce tells the story of the light and dark we fight against, the choice you make and how that can take you to totally different places. She elevates blackness and how much the people have contributed to the stunning world we live in. She reminds young black boys and girls you are more than you think due to society, prejudice, sexism and racism. It’s a film full of love, hope and inspiration. We have the chance to be introduced to a wealth of talented artists from directors, musicians, performers and designers from all the different countries in Africa through the sound, costumes, style and cinematic settings.
In order to attract a new audience that right now especially due to Covid-19 is looking for entertainment and an alternative to feel empowered and enriched you have got to put your money where your mouth is. Disney hiring Beyonce and her awesome creative team is just the start, time for a well needed change!
Open popup Open popup Open popup Open popup Open popup Open popup Open popup Open popup Open popup Open popup Open popup Open popup Open popup Open popup Open popup