MEGAN FOX “I was never assaulted or preyed upon.”

If today, it still takes around 11 years for people to actually catch onto a creepy anecdote from set and gross jokes about it made during an interview with a high-profile Hollywood actress, then just imagine what the world was like before the #MeToo movement.

And yeah, we are referring to the Megan Fox-Michael Bay issue. To sum it up for you guys – during an appearance on The Late Night with Jimmy Kimmel, Megan Fox – at the time an adult woman – talked about the ‘dictator’, Michael Bay. U-huh – that Michael Bay, the dude who made “Armageddon’ and `Pearl Harbor’ and had just directed her in ‘Transformers’. At the tender age of 15, Megan was cast as an extra on Michael Bay’s ‘Bad Boys’ and, being a young and vulnerable girl, she was asked to do things that seem, to say the least, quite inappropriate. At the time, Bay was reminded that she is underaged and as such, cannot be seen holding any alcoholic beverages in a bar scene. Sounds responsible, huh? Nope, Bay did not seem to like that – so instead, he figured that making a scantily-clad 15-year-old child dance under the waterfall and getting her soaking wet was a better idea. Just another day in Hollywood where white men in power make impressionable, way-too-young girls play out some sick kinks of theirs.

Are we saying that you should boycott Michael Bay’s movies? It’s not our place to call for that. We are asking, however, that you all think twice before you catch one of his films at the cinema in the future.

It is, after all, worth noting, that Megan Fox herself took to her Instagram to clarify, that she had never felt used on the set of ‘Transformers’ nor in any of the auditions for Bay’s films (she auditioned for Transformers when she was 19) and holds no grudges against him nor Steven Spielberg, who produced the film.

I was never assaulted or preyed upon.

As part of her auditions for the robot-franchise that made billions of dollars, Fox was reportedly asked to… wash Bay’s car. She, herself, denies that this incident ever happened and her account of what really transpired may very well be true… But what if it really happened and Megan is worried that she could potentially be blacklisted? Is she now protecting Bay, does she really not have any problems with him? Hard to say. Crossing Bay could be a dangerous move – especially considering the fact that long post-Transformers and that infamous interview in which she called him out for being a tyrant while shooting… Bay produced Teenage Mutant Ninja Turtles movie, as well as the sequel – starring Megan Fox as the iconic April O’Neil. What Fox might be doing here is, simply, avoiding a career suicide.

She did refer to other dangerous and toxic people in the industry, preying on young females… without naming any names.

There are many names that deserve to be going viral in cancel culture right now, but they are safely stored in the fragmented recesses of my heart.

It may be something she just does not feel comfortable speaking of in greater details right now. Does it mean that she wouldn’t want to point fingers without having any solid evidence, or is she simply afraid of the potential fallout? That’s for you to decide, but keep in mind everything that was happening over the last 2-3 years – i.e. Harvey Weinstein, Kevin Spacey and the likes – before making any judgments either way. As Megan Fox herself said, it is a dangerous industry. 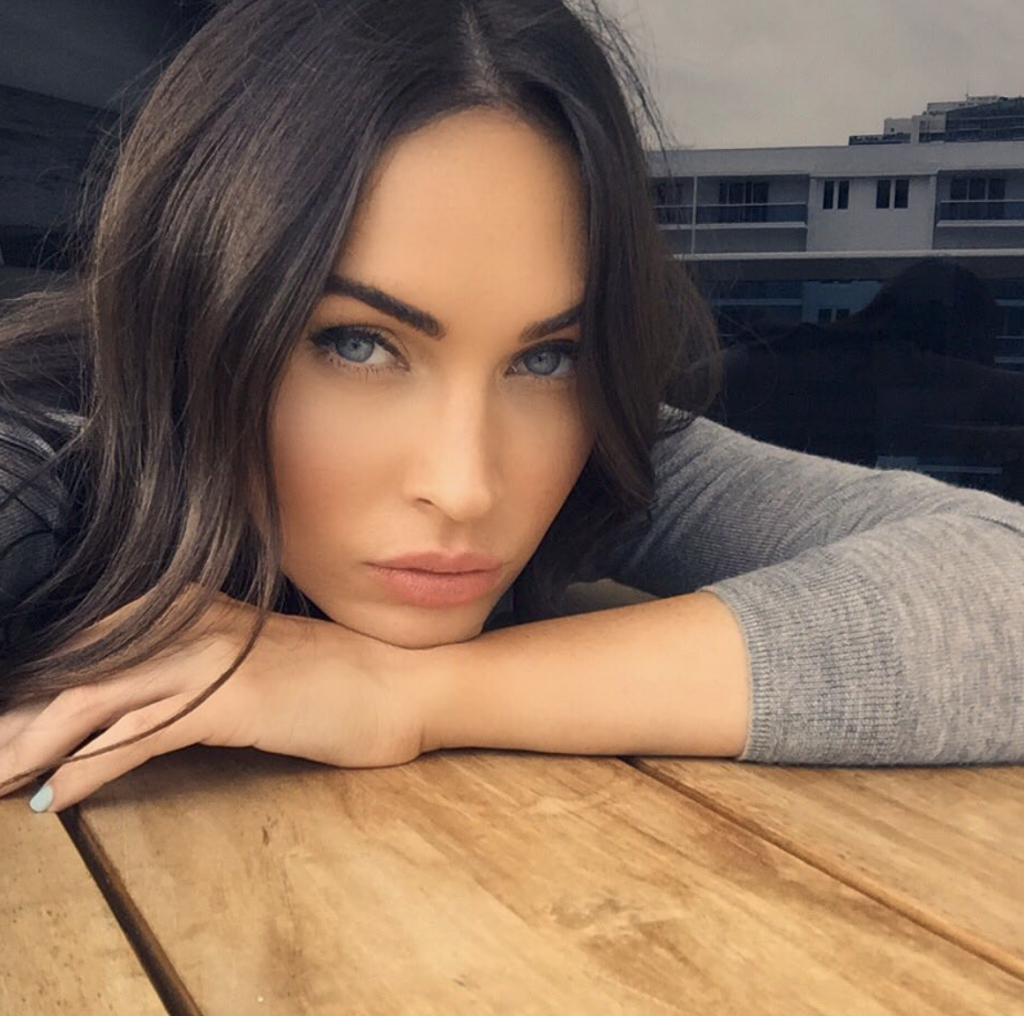 Meanwhile, think of the other famous actress that came out with her own story of the abuse endured on the set of a well-known film made by one of the most renowned filmmakers in the world – Francis Ford Coppola’s ‘Bam Stoker’s Dracula’ (1992). Winona Ryder – 90s sweetheart – was just filming a scene in which her character was meant to cry. Instead of trusting the actress, Coppola decided to throw his few cents into the mix and started… hurling abuse at her! Not only was he calling her a ‘whore’, screaming from behind the camera—he also encouraged the cast to do so as well!!! Luckily, Winona was in great company – the good guy, Keanu Reeves, refused to do so (which, according to Ryder, was the catalyst for their long-standing friendship ever since) and so did the kindhearted Sir Anthony Hopkins.

Why bring it up here? Just think of the parallels here between Ryder and Fox and pay attention to how long it took Ryder to speak up about the abusive set she had to be a part of. Whether it was fear of being shunned from the industry, or something more sinister that kept her from shedding light on the situation, it may well be the very same reason that is making Megan Fox uncertain of name-calling… One thing for sure, this is not the last we will be hearing about it and hopefully, from the actress herself who did not deserve to be treated like a movable object by an empowered male and should get to say her truth freely and without worrying about her future in this plagued world of film. Should any other women ever feel harassed or threatened by Michael Bay, or anybody that Megan Fox refused to publicly refer to, then hopefully they will be brave enough to bring it to people’s attention without having to worry that it may potentially hinder their careers. These things cannot be taken lightly and no one should ever feel frightened of putting there experiences out there for those that have been silenced for too long – those who may need the powerful women with big platforms to reveal their stories of exploitation, sexual assault and harassment. Those, who give courage to the unheard. 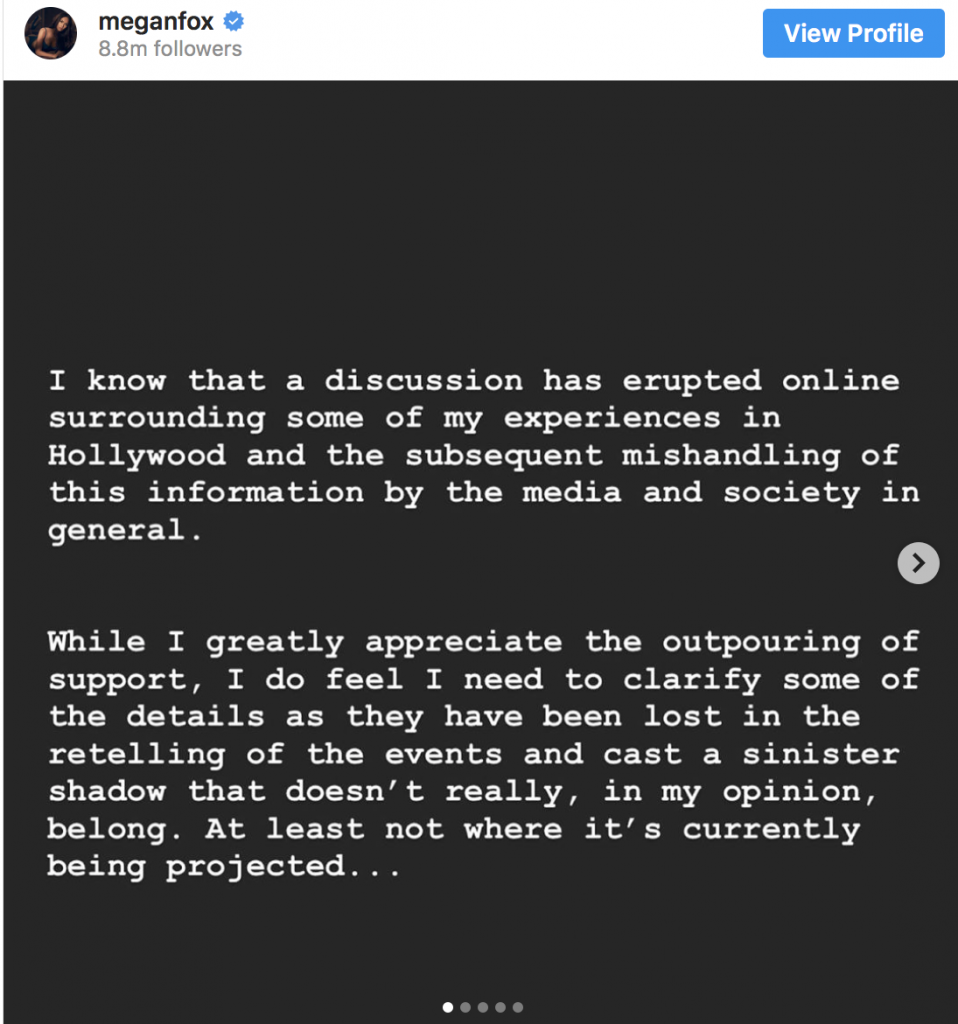 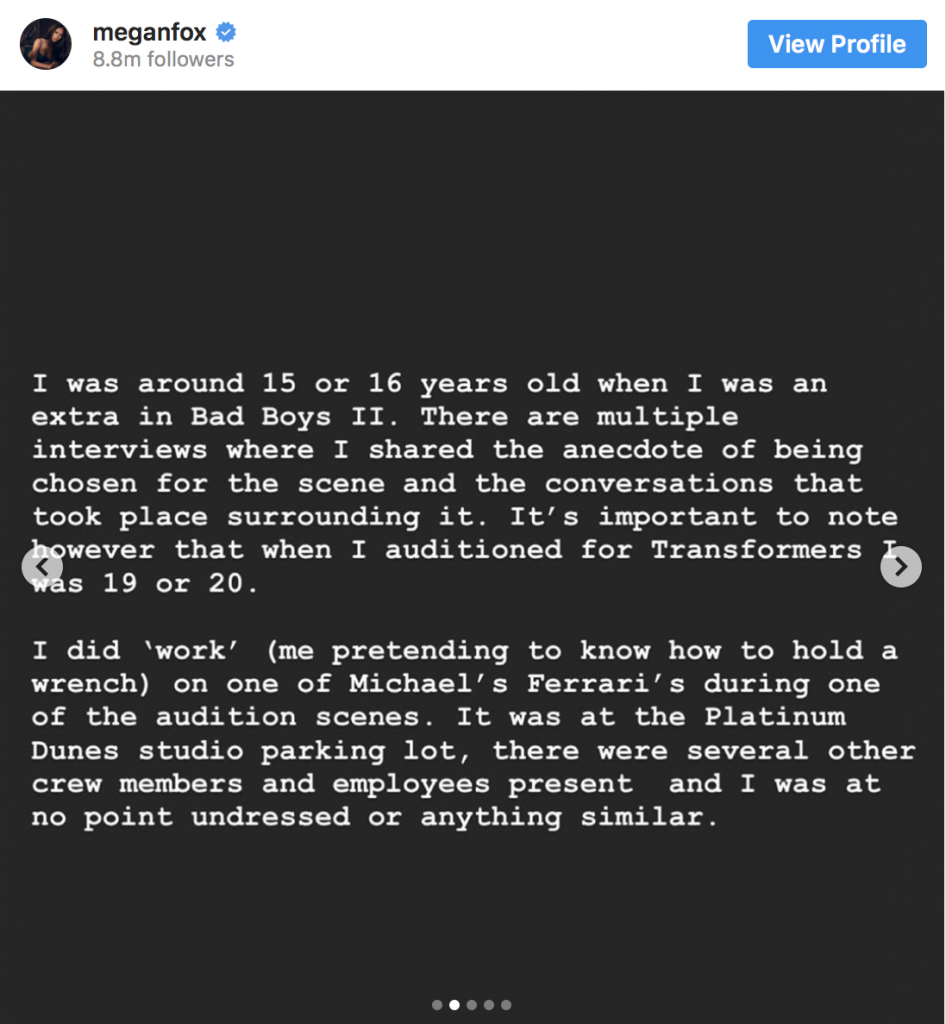 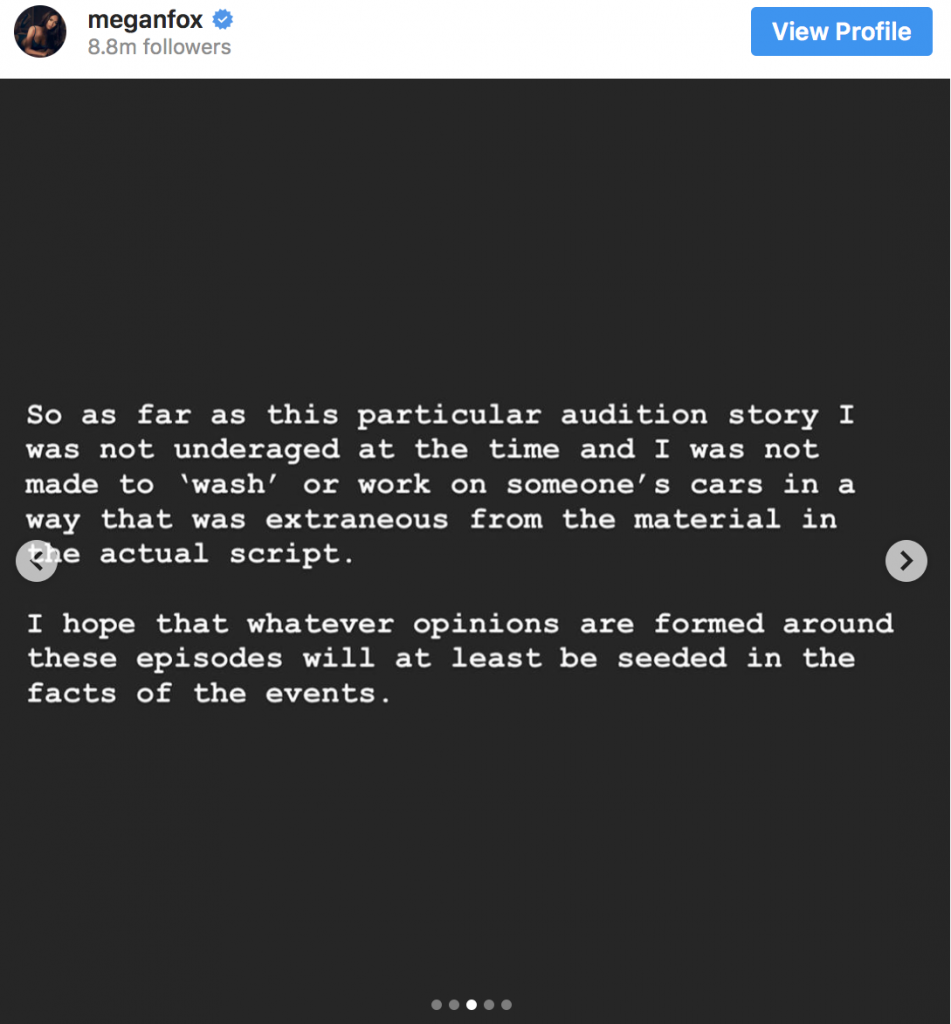 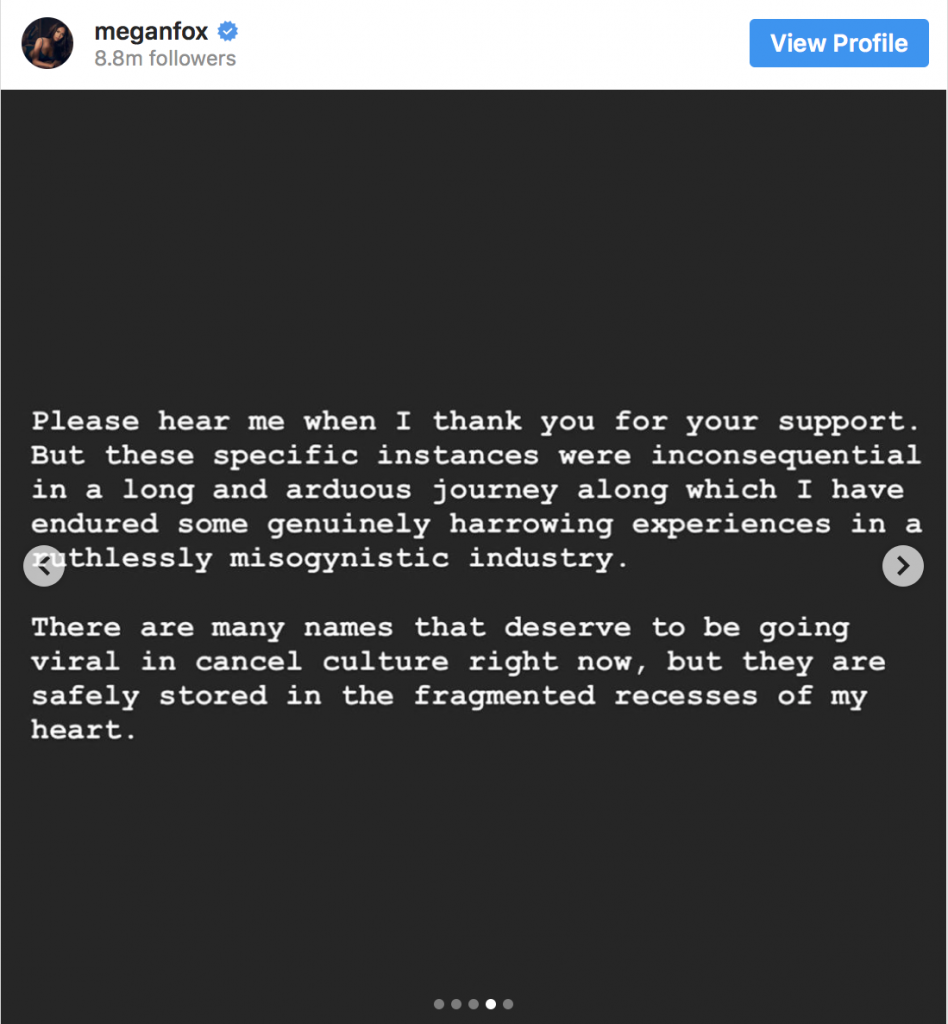 ‘COME AS YOU ARE’

FANCY A NIGHT OUT ? WELL IF YOU HAVE A CAR YOU ARE IN LUCK! DRIVE-IN CLUB!