“A big theme of the movie is what’s truth and what’s illusion, what’s real and what’s not.” BEN BERMAN…. 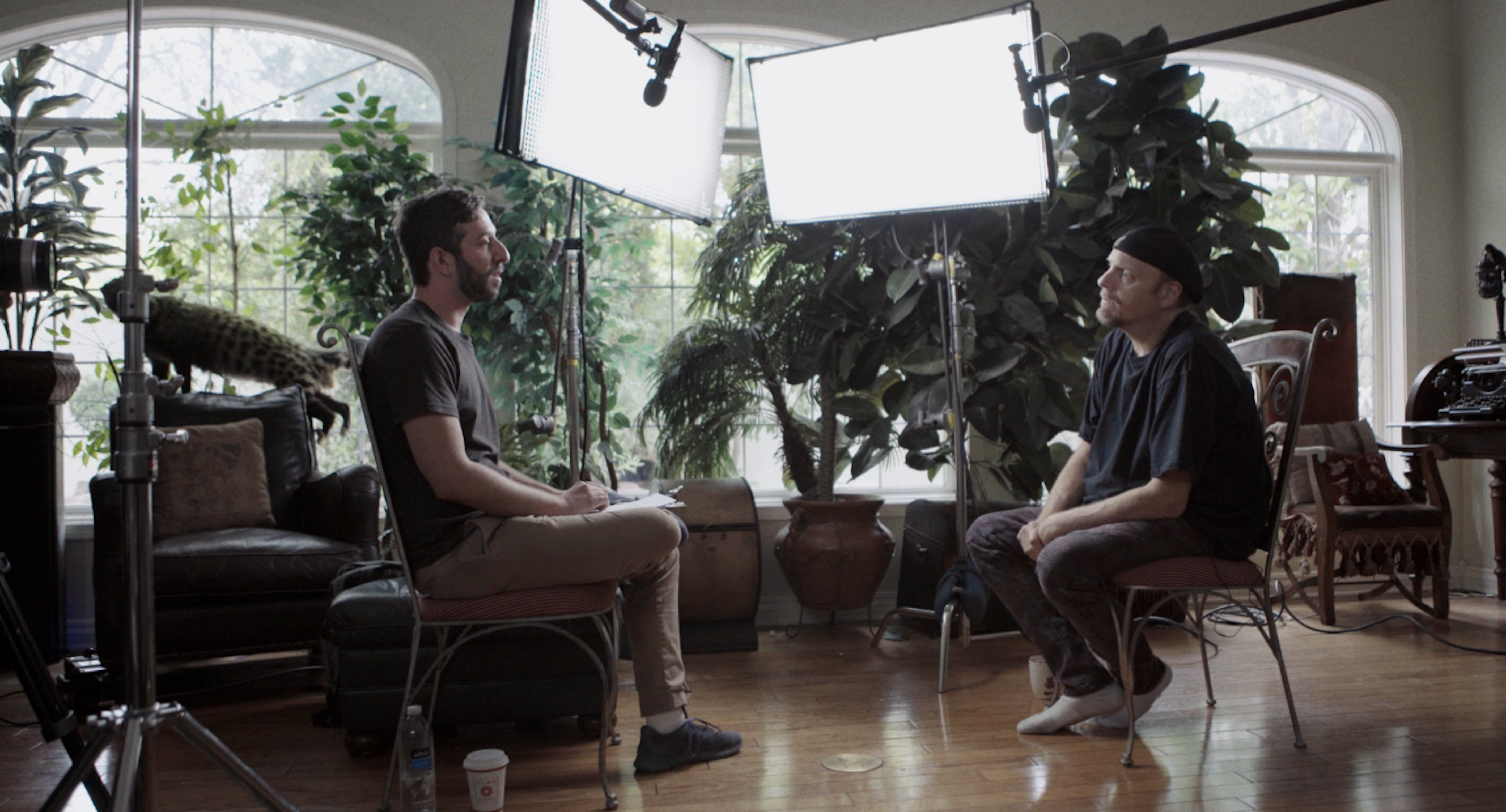 American Director/Producer/Writer Ben Berman recently visited the U.K to share his debut documentary ‘The Amazing Johnathan’. It starts out as the story of a once famous successful Magician who has recently been diagnosed with a terminal illness. Halfway through the doc the narrative switches on Ben and his relationship with Jonathan, good guy VS bad guy. While the whole time you question what is true and what is fabricated. It was great to catch up with Ben and find out more and his personal journey as a film-maker.

MAX: ‘The Amazing Johnathan’ wasn’t a TV star here so I really didn’t know who he was. What made you choose him for your debut doc?

BEN: I didn’t know it was going to be my debut. I was just interested in him. When I was 13 he was on my TV all the time, he was doing Comedy Central and I was a fan of his. I just liked his stuff and was into it and I hadn’t thought about him in decades. In 2013 I heard his name again and heard that he was ill and doing some pretty serious drugs and I thought that there would be a really interesting short doc in that.

A magician confronting his mortality and that sounds right up my ally. I didn’t realise it would become what it became.

MAX: Prior to this you were writing comedy scripts, you use humour really well in this doc. There are moments when it’s uncomfortable and you make us laugh. There is this appetite right now around stories based on reality. You’ve managed to merge the two worlds together?

BEN: I think it’s just the way I work, it’s how I like to tell stories. Blending the sadness and intense serious stories with the awkwardness and funny things. So if it’s docs or fiction I blend those things. It’s the value of me.

MAX: There we’re times when Johnathan was really mean to you. Your mate is featured in the doc and is telling you that this man is taking the piss. At times it felt quite love and hate between you two?

BEN: Aren’t most good meaningful relationships it’s not always happiness and love that’s too easy. It’s too surface. John and I fell into brother role, the older brother screwing with me and I was the kid brother just taking it.

MAX: I thought you were really good at hiding how hurt you felt from Johnathan. He was constantly trying to be your guide. Did you not find it undermining at times?

BEN: Yeah there were a lot of things that didn’t make it to cut, where he was telling me that he wanted a shot of him where you can see him coming out of stage, I want the camera here. What someone like me has to do is give him what he wants in the moment but do what I want to do. I need to keep access with him. But I also need to do what I do. I made sure not to give him too much, so that he wouldn’t see it as it’s his movie, not I’m making a movie on him. 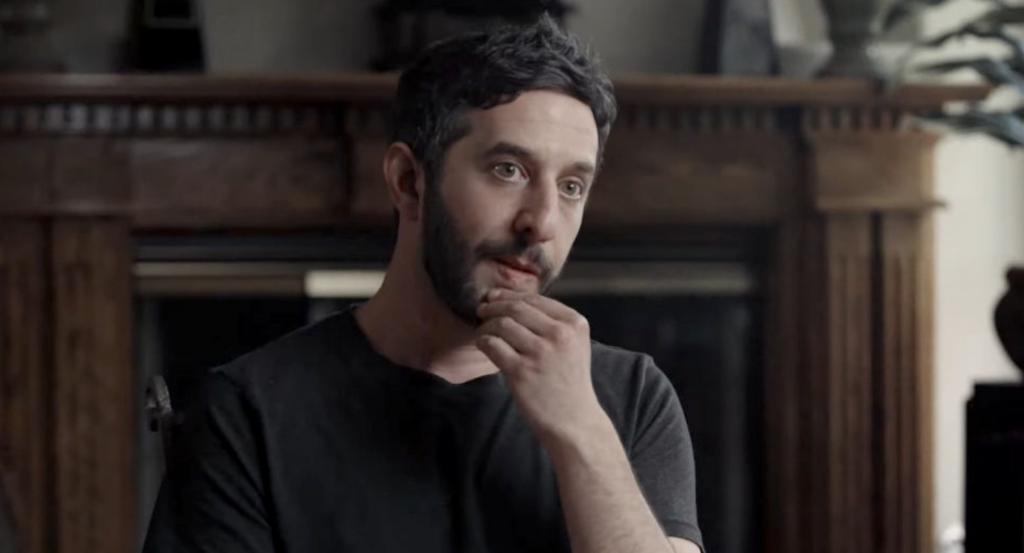 MAX: it’s interesting being impartial, when people think about making a doc on someone people don’t think about the importance of the access to that person. They have to like you, it’s so crucial to the film.

BEN: Yeah absolutely. There’s so many things at play that you need to balance at one time. Keeping him happy enough to let you come back but pushing him enough so that you can get interesting stuff, which is always challenging.

MAX: How does it feel to be in front of the camera? .’

BEN: It is fun to be on this side of the camera for sure. I entered into my movie as a filmmaker but became kind of like a costar, spending a lot of time in front of the camera.

MAX: Johnathan is actually very sick and going through quite a journey and we don’t really know where we’re going, which is weirdly addictive to watch. He’s a magician and you find yourself wondering what is the real truth.

BEN: “I didn’t know where I was going with this! It wasn’t deliberate that I wanted to make a documentary about a magician where you don’t know what’s real, but it’s a really cool theme.”

I’m starting to looking forward to future documentaries, to some degree, I’m starting to think less. For some reason I chose Johnathan and all these things happened which you couldn’t have foreseen. I’m going to go film someone tomorrow and I have an inkling, and I trust myself enough to put some of my money into it and drive out of London because I just believe if I’m interesting enough in this small thing then there’s something there. 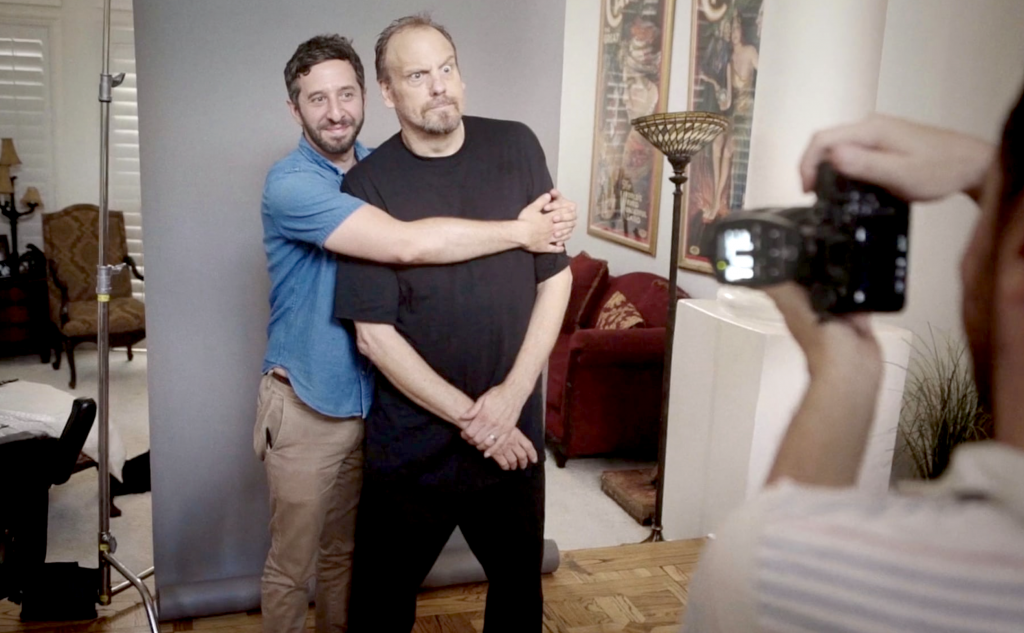 MAX: It’s interesting as I’ve just been at Raindance which has a lot of people who have just come from their day job and they talk about how they can’t get their films made because they can’t get backing and money. They question their ability. at times and about how you’ve overcome these challenges.

BEN: I haven’t overcome either to the degree I want to. I believe in myself but it isn’t to say that I don’t question myself. That’s part of my human condition.

“There’s plenty of projects, particularly fiction that I’m aiming to do that I’ve been trying to do for years. People say no to me all the time, I get so many passes on jobs.”

MAX: It’s interesting because of the ‘no’s’ sometimes the most talented people give up. The most successful aren’t always the most talented but they are driven. How do you take that ‘no’ feeling I’m not good enough to then saying it’s alright I’m going to keep going?

BEN: I get so many ‘no’s,’ if you see my emails you’ll see 15 rejections in the first 15 emails. You keep on going and you try to adapt because what else can you do. I have no other skills. I am persistent.

“Maybe I’m not the most talented filmmaker but I do keep on going till you die. What do I attribute that to? My dad, who you love in my movie, from a young age was interested in building boats and started building a boat in our garage and he’s now built two big boats. That probably unconsciously entered my mind, unorthodox creation from nothing. So I’ve thought what’s my thing? Making movies.” 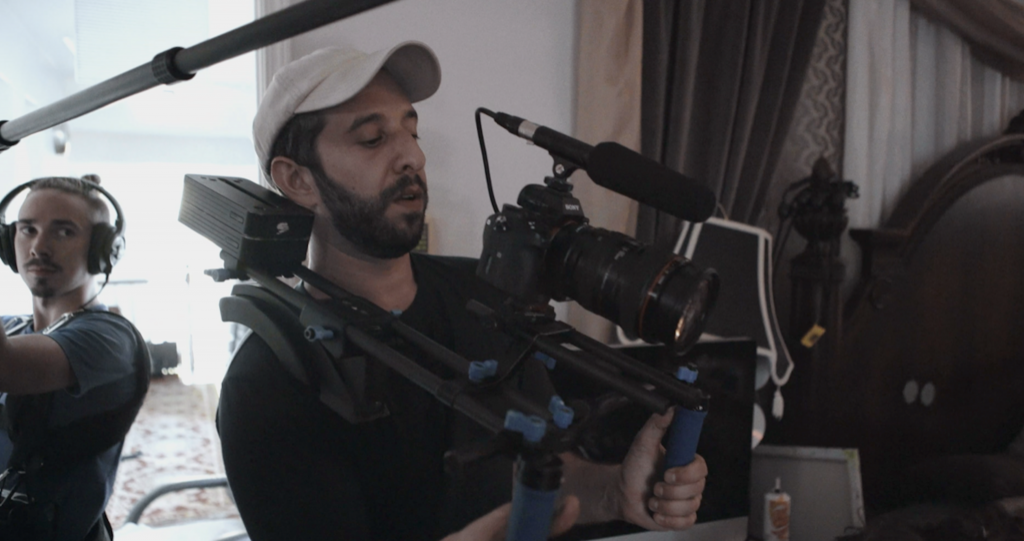 MAX: Your dad is awesome, he does reminds me of people who worry and question the whole indie journey when they want the best for you.

BEN: No, he’s always been very supportive of me, especially that first scene you see him. He was just confused as to why he was on camera, if you’re aiming the camera at me what is the story here. And he’s right, that’s such a good question regards to this movie. It starts out as about the amazing Jonathan and then goes onto something else and something else.

MAX: It’s so personal to have your family and friends on camera and then you forget and your own story unravels on screen. Were there any parts that you were reluctant to keep in?

BEN: I think in the edit it was less about me, as it was pretty solidified that’s what we were doing. The amount we went reflective and about the process and the amount it was a documentary about making documentaries. We definitely played with levels of that. We did have a segment in an earlier when I did get financiers and producers come on board, we did have scenes with them and discussed how that added to the stakes of ‘shit I do have to deliver a movie now it’s not just me anymore’. There’s someone’s money in this and they’ll want things a certain way. 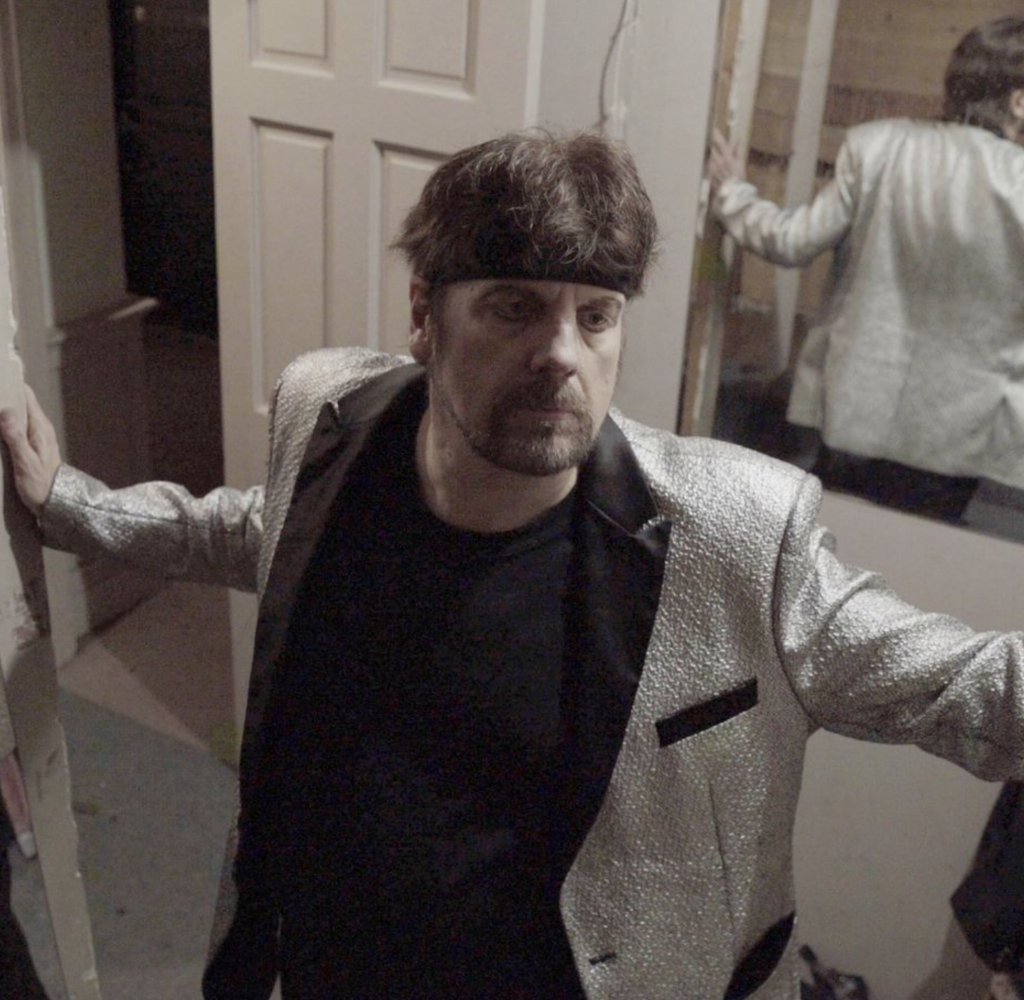 MAX: They do say meeting your idols which I’ve experienced, can be a bad thing. At the end of the journey did you think ‘I’m so glad I met this man I watched on TV as a kid’?

BEN: Overall I’m so pleased with this movie the things that have come from it I could of never of imagined. When I was younger I was a fan of his, I wouldn’t say he was my idol. I didn’t have that oh my god I’m going to meet him.

MAX: Someone asked you “did you feel bad for questioning him if he was sick” and you said deadpan faced “no I didn’t actually, his friends thought it, I thought it”. I thought good for you, that’s the charm of why it works, the honesty of asking what we’re all thinking.

BEN: I found myself almost playing the role of an investigative journalist which I’m not but I was trying to service what they do. It’s kind of nice and refreshing to see someone who’s just like you, I’m even dumber than everyone, I don’t know how to be a journalist. It’s kind of refreshing.

MAX: the charm of a good journalist is making people feel comfortable enough to open up which you do very well.

BEN: I would want to agree but I don’t know if I do agree. 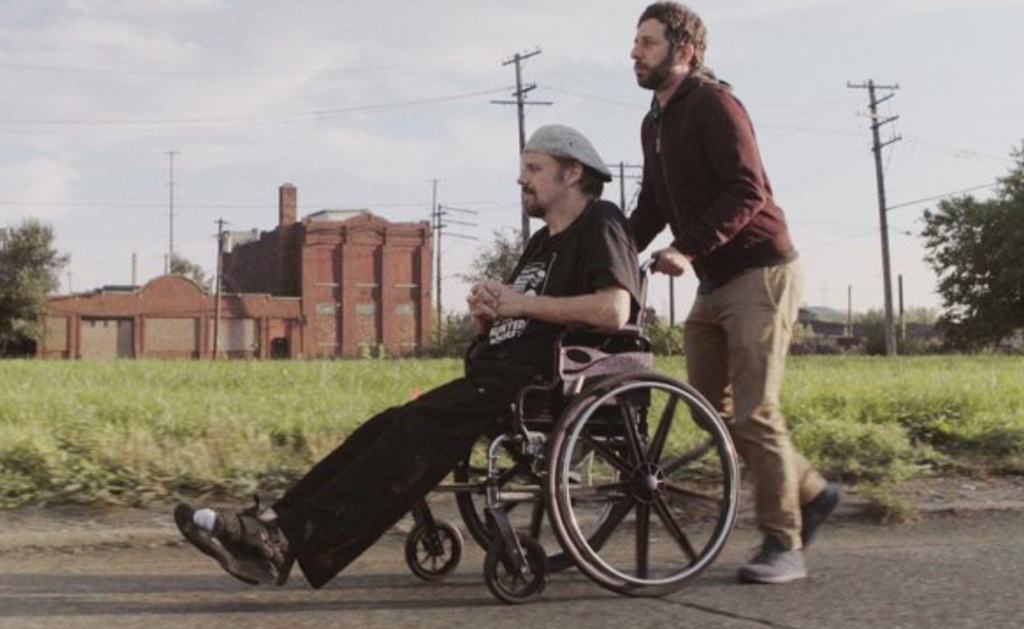 MAX: it can be a very dangerous skill as people forget they’re being recorded. He pushes you to do certain things in the doc including taking drugs. We see you go to potentially join in, but before you do you call a lawyer to get advice and we still don’t know if you did. Did you?

BEN: The Q&A answer? A big theme of the movie is what’s truth and what’s illusion, what’s real and what’s not. Still after the movie has been wrapped for a while now there’s still things that we don’t know what happened. So the answer is, we still don’t know.

BEN: He’s alive. He still has health issues, we wish him the best.  I’ve been reading things especially in London people are saying they weren’t familiar with Johnathan going into this then this movie totally blew me away. I think we are almost bringing a new generation to Jonathan who will see this and then go check out his stuff on YouTube.

‘THE AMAZING JOHNATHAN IS AVAILABLE TO WATCH OVER AT HULU.

WE ARE SOOOO READY FOR ‘BOMBSHELL’!!!