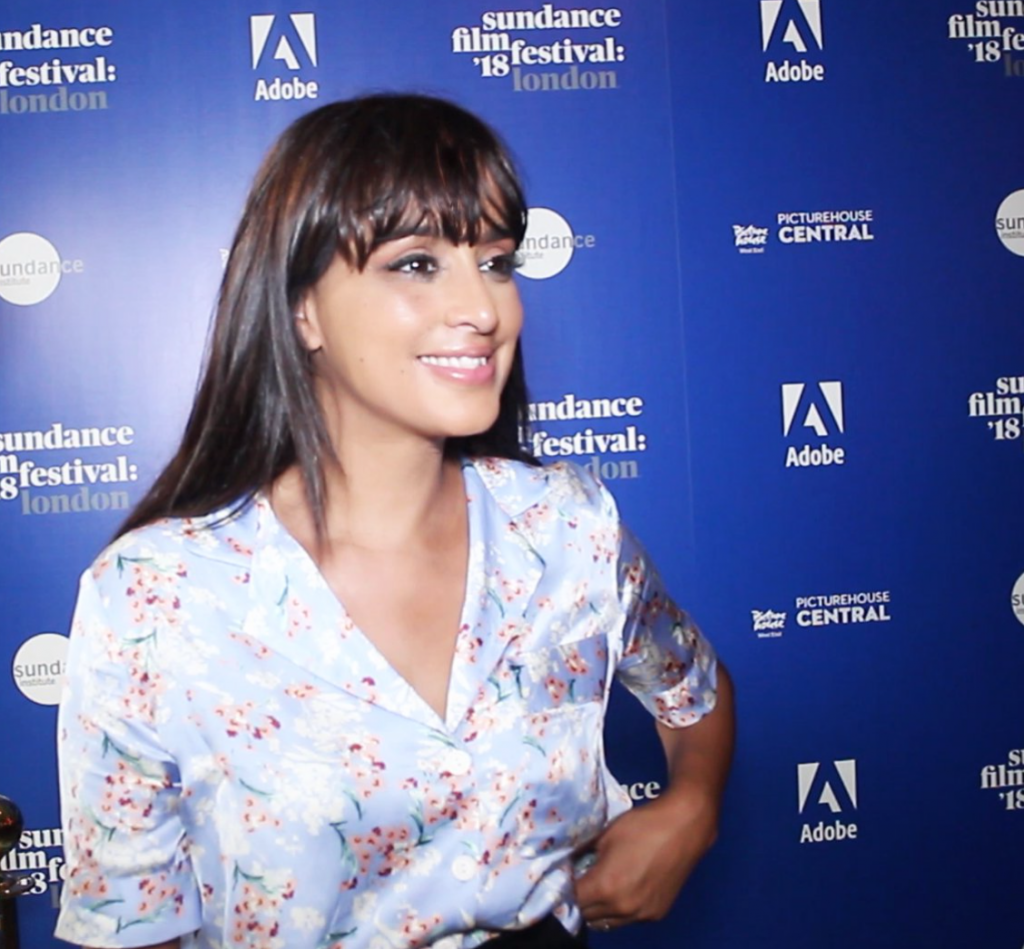 Sundance London has been a total blast this year. I have been running around at the stunning Picturehouse in Piccadilly bringing you all the action all week on my IG stories and Twitter. I hope you have enjoyed all the  updates! This year once again a bunch of awesome films and documentaries by super talented and dedicated independent directors have been showcased. 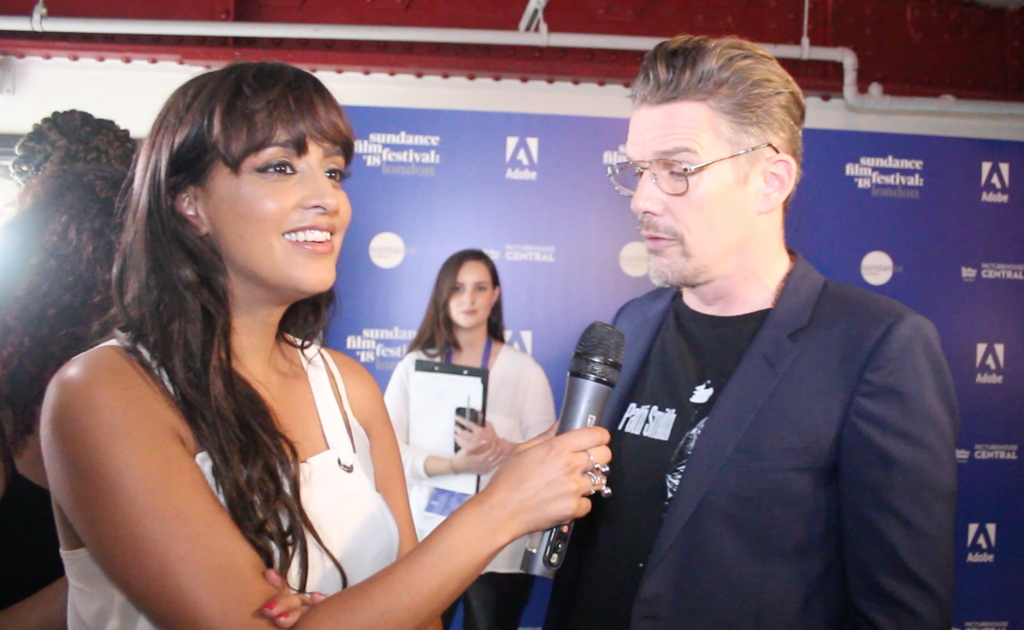 Starting with ‘First Reformed’ starring the incredible Ethan Hawke. This could potentially be the best thing he has ever done, Yes I said it, even better then how awesome he was in ‘Training’Day’. Ethan plays a pastor of a small church in New York full of emotion and confusion around him. His faith is tested while he is trying to save one couple including a very pregnant Amanda Seyfried. It was great to catch up with him at Sundance. He was relaxed and so humble and very happy to be there. We chatted about the rave reviews and he genuinly seemed very grateful even knowing he has been in the game since he was thirteen years old. There was no hint of complacency or ego. I highly recommend you check ‘First Reformed’ out on it’s release, Ethan rocks!

#SundanceLondon has been a blast final day … I wanted to share one of my fav people from this years line up on why he thinks festivals like this rock! #EthanHawke @sundancefest more on the blog https://t.co/wjo6o4gEzS 😛🎥❤️ #FirstReformed great movie 🙋🏽 pic.twitter.com/vp7Qly2Ocj

“The Tale” which has been directed by Jennifer Fox and has her telling her own story of sexual abuse as a teen. It’s stars Laura Dern who is awesome in the role. This will be a tough film to watch but it’s so very important highlighting a subject that we don’t see that often discussed in such a personal honest way.

British actor Idris Elba has his directorial debut in “Yardie”. It’s been adapted by Victor Headley’s book. It tells the story of a young Jamaican caught up in gang culture heading to London where even more trouble awaits him. Revenge and retribution is on the cards. Actor Aml Ameen does a great job playing troubled D and the soundtrack is cool.

Congrats to @idriselba on his directorial debut with @YardieFilm dope, intense, aggressive, heartfelt and @AmlAmeen kills the role as D ❤️🎥 @sundancefest support and enjoy this film when it’s released. By the way the soundtrack is so goooood 😜🙋🏽🎼 Good to see you both ❤️ pic.twitter.com/fysMNPhFDi

Shouts to @idriselba for directing his first movie @YardieFilm and congrats to @AmlAmeen who killed the lead role as troubled D!! #Culture #Gangstas #SoundSystems #Love #Revenge and a load of banter!! More on my blog! https://t.co/K6kyqEcdcl #MaxRecommends 🍿🎼🔥 pic.twitter.com/1GLk4ds9Fz

Documentaries are always one of my fav aspects of Sundance. Last year was amazing who could forget the superb “Icarus” by Bryan Fogel which ended up grabbing him a well deserved Oscar!

This year “Half A Picture” delves into the lack of diversity in Hollywood where women are concerned behind the camera. Director Amy Adrion delves into why and how to change it. She talks to successful women in the game including Ava DuVernay Lena Dunham and Brenda Chapman.

The Miseducation of Cameron Post stars the awesome Chloe Grace Moretz. She plays the role of a gay teenager who gets sent away to a camp to basically “get the gay” pushed out of her by religion.

Chloe and the rest of the cast tell this incredible sad, compelling and thought provoking story of love, prejudice and sexuality. Well done Desiree Akhavan for making such a real film that will touch everyone especially the LGBT community and with so much humour.

Toni Collette stars in horror Hereditary, Ari Aster’s debut feature film. It’s scary as hell and not for the faint hearted. Toni has totally reinvented herself in this role and is unrecognisable. Violence anger and a family tormented is the plot. Make sure you have someones hand to hold when you go to see this, very strange. 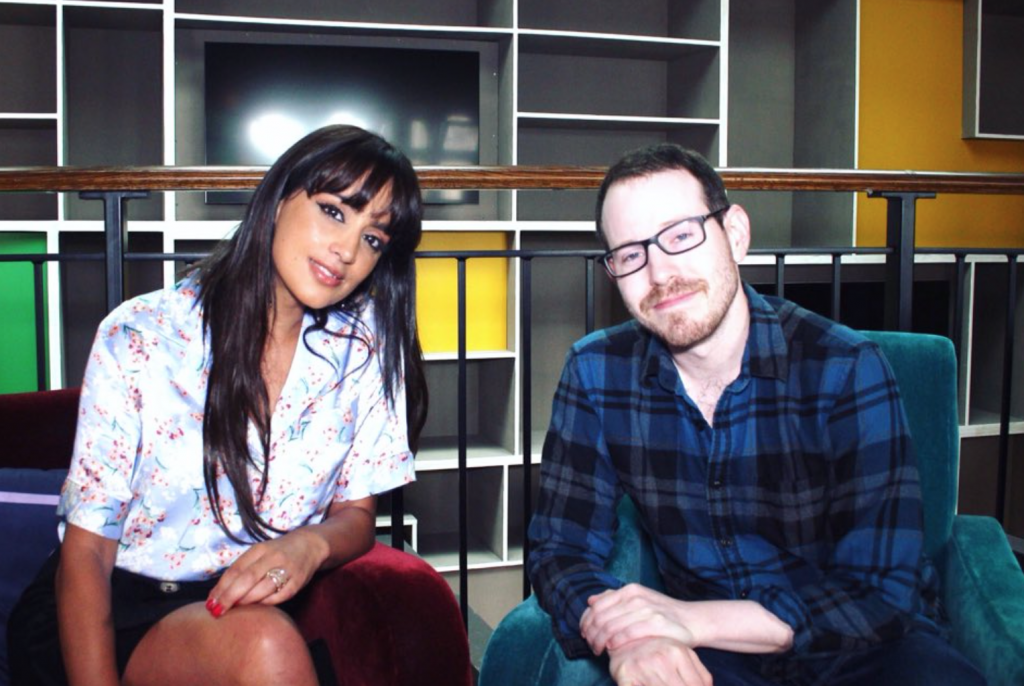 Sundance London has been quite an experience over the last few days. The Picturehouse has played host to twelve very different and interesting films/docs. A lot of American directors with Brits Idris Elba and Jim Hosking representing for us

I had the opportunity to chat with some incredibly cool powerful people in the movie world. From the ones that select and decide the programmes like Kim Yutani and Clare Binns to respected great names in film like Ethan Hawke and Idris Elba.

The best thing about the festival for me is the chance to see awesome independent films that we might not get to see otherwise and learn from other creatives.

I want to focus a little more on one of my personal favs that truly left me entertained, inspired and wanting to learn to Kick Push.

Something a little more chill and super interesting to watch is “Skate Kitchen”. This film celebrates and highlights New York skate culture from a female perspective. All the cast aside from Jaden Smith were plucked from the streets caught skateboarding by director Crystal Moselle. Romance and tricks with loads of girl power! This film is awesome and one of my personal favs from this years list. 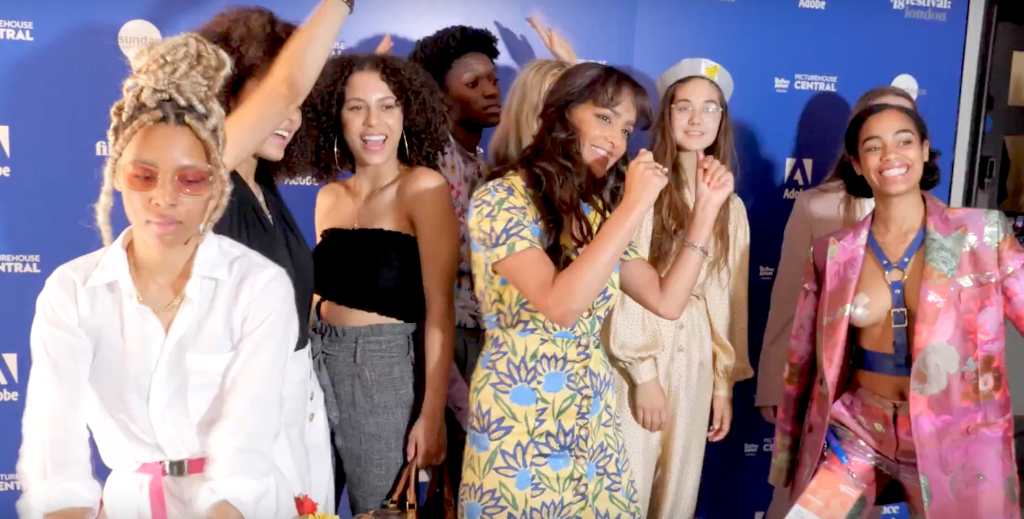 It’s a film based around a group of skateboarders who are all young women passionate about the culture and seem to get a sense of belonging when Skateboarding. The film also explores them going through heartache, insecurities, curiously, growing up, peer pressure, sexism and just basically the pressures of life.

The film shows how sisterhood can empower you to be more comfortable in your own skin and feel accepted when you find a tribe with a similar passion.

It also shows the party life, drugs, experimentation and sexual freedom to do what the hell you want. 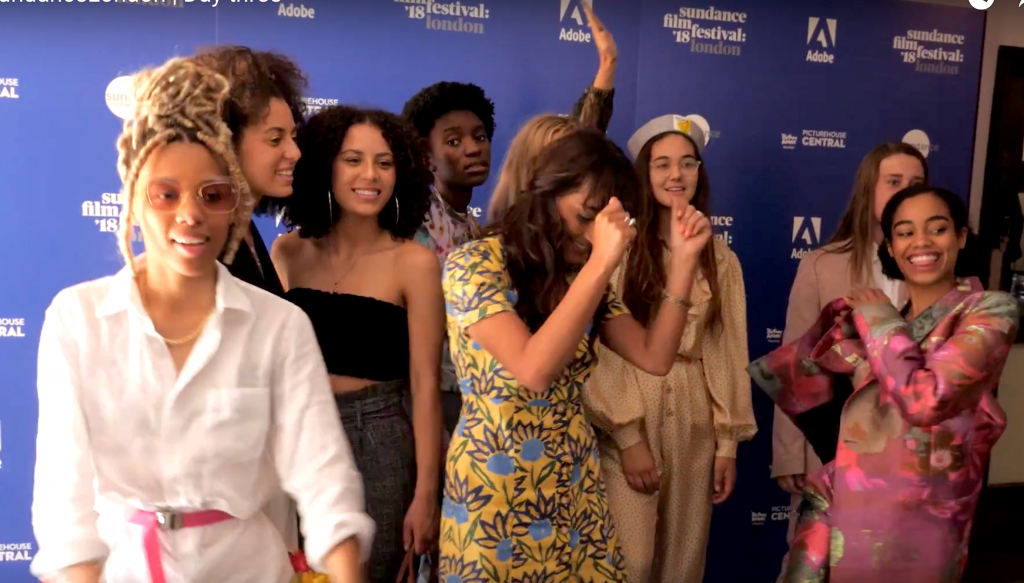 Yesterday over dinner at Nando’s 2 of my male friends both 25 – years – old went on about if a man had made a film like this people would go nuts but because it’s a woman it’s ok??

They even suggested it’s damn right taking advantage of young innocent women who want a better life and stardom. 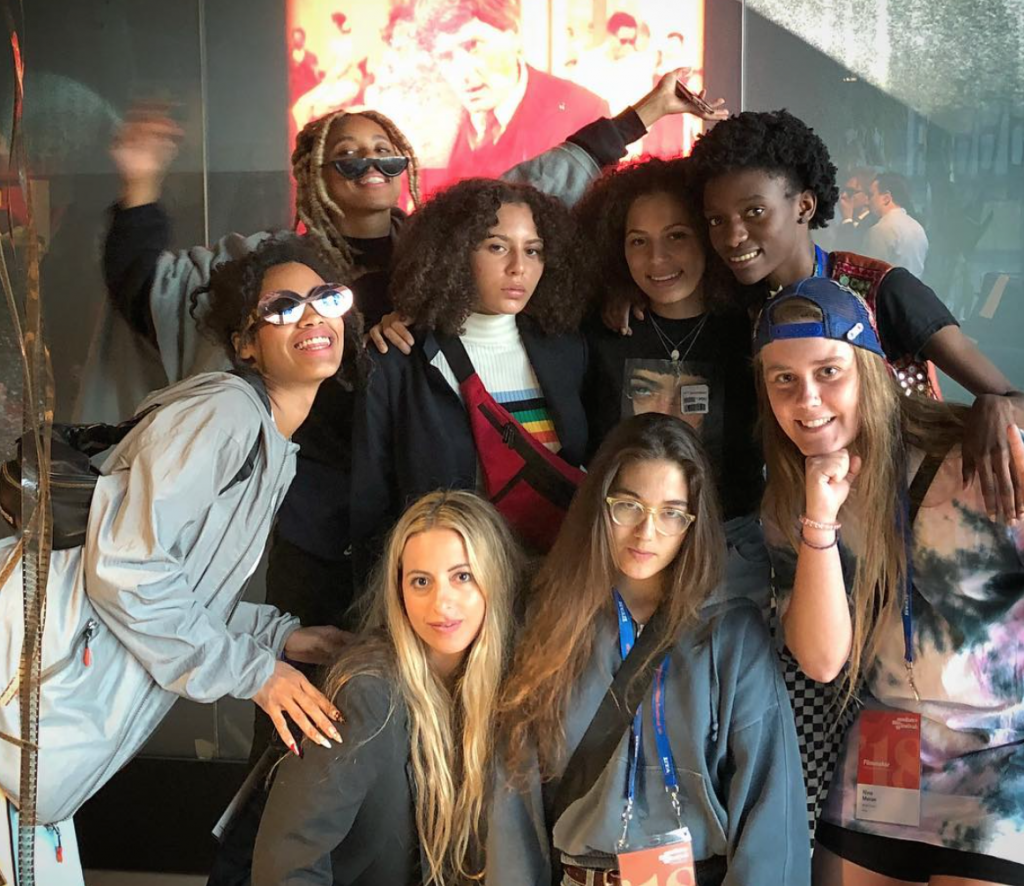 This is also why I love good art, we discuss, we get passionate and we care. So for that reason alone I think it’s a good thing that Crystal filmed in such a candid way

Now let’s be real a lot of people when they are around 18- years- old are out here experimenting and trying to fit in. So whether you like it or not it’s a reality for a vast amount of teens. The director reflecting that side of youth culture might shock or make you like my friends get upset and even alittle angry but it’s a side of life that people are living.

I took other things from the film Rachelle Vinberg’s character is shy and such a tomboy, I totally related, that was me when I was 18- years-old,  feeling awkward and not really fitting in. Seeing her start to find her confidence and get comfy in her skin was dope to see.

I met the girls yesterday and I immediately could see how similar they are to their characters.  The only one that really surprised me was  the lovely Nina Moran. In the film she is super confident, loud and fearless while in person she is very shy and a little introverted.

Other aspects of the film that I enjoyed seeing was the solidarity between the young women having each other’s backs and getting over bad sitautions as a team.

Also very important to point out they are very talented Skateboarders and constantly are working to be the best while helping each other. Learning to forgive and show love more than envy and hate is also so refreshing to see on camera amongst girls.

Skate Kitchen is out in the UK in September it also stars Jaden Smith who is cool as hell in it.

For more on all these films and to book tix hit up the PictureHouse.