So Fifth Harmony have been reminiscing on their 4 year anniversary. Dinah, Normani, Ally, Camila & Lauren all tweeted these sentimental messages to each other and their fans. 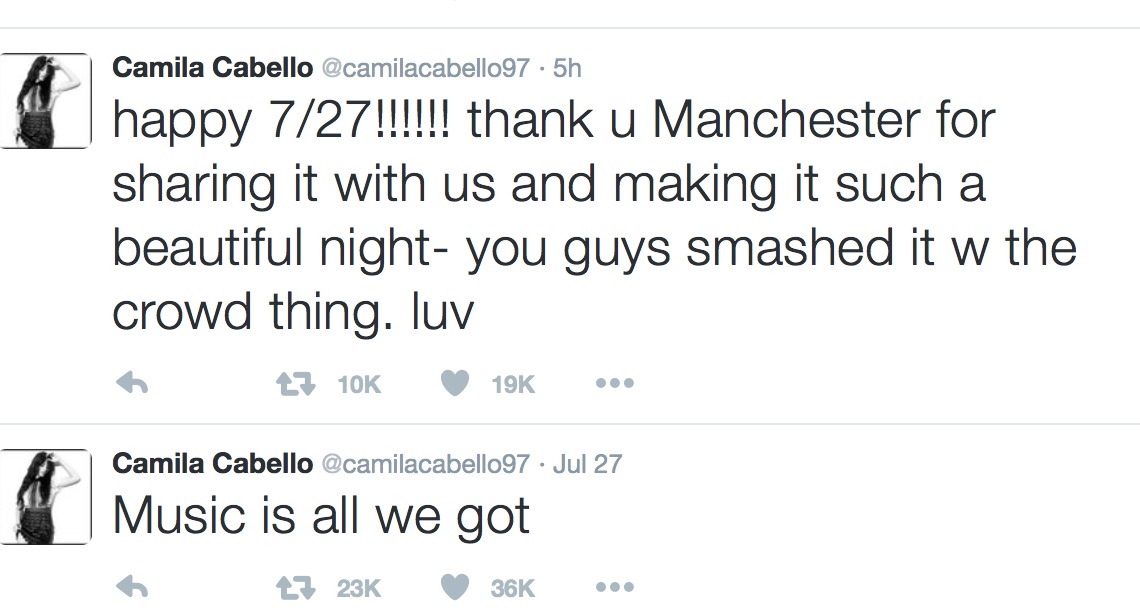 So I thought I would TBT when we first met and clicked!! I remember everyone was at STB rehearsals at the 02, I rushed back with my producer Alex and the whole building was empty.

I had pushed for the girls to come in and be guests on my show even though most were totally unaware who they were and at that point didn’t see the talent or songs FH were coming with.

I think I loved their voices and energy, plus I always champion acts early when the pop world seems to ignore them until they become huge. That’s something I have never really been about, if I love a song or an act even if nobody else is paying attention I will support and go with my own gut.

In the casse of FH I kinda fell in love with them straight away. Once we met, it was like being back at school with a bunch of silly, funny and amazing girls.

Ally : Stunner, baby J.Lo, has the biggest heart ever and not a bad bone in her body!

Dinah : Sweet, strong and got this Beyonce vibe about her ‘Whip the hair”

Camila : Great spirit, funny as hell and a total babe. Plus gives the best koala hugs.

The girls have covered Destiny’s Child for a TV show in America!! How incredibly cool and scary doing songs by one of the biggest girl group in the world!! They look adorable and killed it!

I meet a lot of famous girls in my job but very few do I genuinly click with and imagine hanging with away from the studio, but FH without any doubt are girls I would party with and have girly dinners with.

You have to remember much like Little Mix, Fifth Harmony were created by Simon Cowell and a TV show. The fact they started like that makes it twice as hard for them to be taken seriously as musicians and not just another manufactured group.

However I have watched them live and have their new album 7/27 and can fully confirm these babes are very talented and over the next 2 years will grow and individually I think will collab with different acts to express their own personal taste in music, but always coming back together as a group.

Sisters and best friends full out at times, so I’m sure the girls have moments when they drive each other nuts and argue, but that’s normal. You fall out, you make up and move on.  I wish FH all the success and happiness in the world, love you girls happy anniversary!